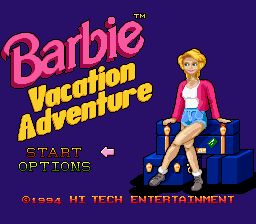 At a glance: Not only has Barbie Vacation Adventure brought had adverse effects on my mental health, but it's brought back memories of incessant doll commercials I sat through as a tyke. For one thing, I just woke up from a nightmare about a toy called "Little Baby Poo Poo." There was a commercial in the dream, in which blond-haired girls squealed with delight as Little Baby Poo Poo rapid-fired turds out of its shiny plastic backside. Also the doll grew tangled facial hair overnight which could only be removed via the application of human tears. There's no punchline here. That is actually the kind of dream I have these days. Thanks, ROM Pit.
Platform: Super Nintendo Entertainment System, 1994
Know a terrible ROM? Email me!

Story: Man it is a good thing that Barbie isn't a creepy baby doll! She is just your normal, everyday, hideously successful fashion model/teacher/astronaut/prostitute/President/communications major that likes spending time with six-year-old 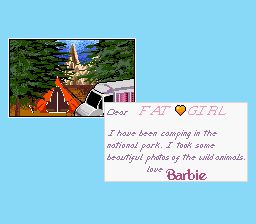 Thanks, Barbie! You're the best friend I've (n)ever had.girls. Anyway, she's going on a magical size 000 vacation all over the United States, which you get to watch from your living room rather than participate in because you are grotesque and unpopular. But at the end of every level she will send little postcards home you and all of her prepubescent fans!

Gameplay: The player selects a vacation destination from a world map depicting a dystopian United States in which the Midwest has been sacrificed to giant nightmare clowns. Vacation Adventure also provides the essence of real Barbie dolls by letting you change as many as TWO OUTFIT OPTIONS before stripping her naked, popping her head off, and leaving her to rot amongst the corpses of her sisters.

Mini-games: No wait, that was just what I did, my bad! In the game, you select a vacation spot from the map and explore all of the "mini-games" this "world" has to "offer." The majority of them can be boiled down into one of two categories: methodically aiming at bad drawings with crosshairs or thrashing around in 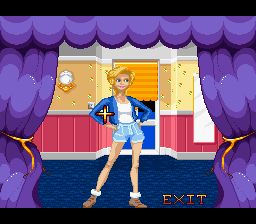 I too enjoy the television program "Upright Citizen's Brigade."poorly-designed platform levels. Mastering the first type of mini-game requires that the player knows how to point. Beating the second requires the player to be a chimpanzee in a scientific study who will receive an electric shock if it fails to find all of the presents Daddy bought for Barbie in the last level.

Graphics: They put a lot of desperate effort into the graphics, but the main character looks about as much like Barbie as Little Richard. She actually looks like a normal woman, and that really made me think: If girls start playing with -and idolizing- dolls that look like real people, they might not grow up with as much of the crippling self-esteem issues that cause them to starve themselves in adulthood.

Which would be horrible, of course, because boys totally would not jam their penes into abstract concepts such as "personal worth." For shame, Barbie Vacation Adventure. For shame.

Fun: For an adult? Of course not, you fucking dimwit. The game is laughably easy, except for the parts that are "hard" because they're so horribly designed. But it'd be a good way to keep little girls occupied for an afternoon, I guess. I'm more confident in its appeal to the opposite sex, as I suspect the beach volleyball game could keep little boys occupied until about halfway through graduate school.

Defining moment: In the mercifully clown-free Wyoming world, you have to do the endlessly exciting and creative "platform hopping across three inches of deadly riverwater" stage. This is one of the laziest level 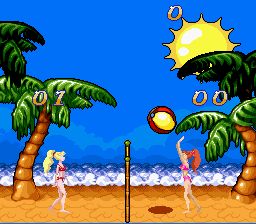 Highly educational.designs Ive ever seen, but it's made "challenging" because Barbie can't actually jump on account that her pencil-thin ankles would snap clean in half from the weight of her bulbous torso. Instead, she makes an awkward striding motion with her mile-long legs. It makes traversing evenly spaced platforms infinitely more aggravating than it has to be, especially when she decides to randomly jerk violently in mid-stride. What should have taken me -and any respectable 4-year-old- two minutes instead ate up twenty, which is a great way to extend the length of your level when you have no idea what the hell you're doing. Fortunately for capitalism, kids are too stupid to know when the 'challenge' in something is just beating an awful system.

But who cares? It's Barbie Vacation Adventure for Christ's sake. Given what I was expecting, this shit's a shining plastic pink diamond of gaming technology.