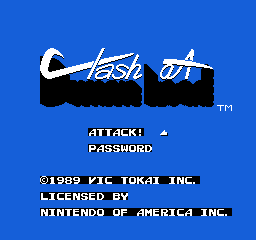 At a glance: "HI MY NAME IS BILLY I LIKE PLAYING VIDEO GAMES AND ALSO EATING MY OWN BODILY SECRETIONS MY FAVORITE GAMES ARE THE ONES WHERE YOU RUN AROUND AS AN ARMY MAN AND SHOT THINGS BECAUSE THOSE ARE SUPER AWESOME AND I WANNA BE A TOUGH ARMY MAN TOO I LIKE IT WHEN I SPRAY THE BULLETS AND EVERYTHING DIES I LOVE IT SO MUCH THEYVE GOTTA REMIND ME IN THE GAME WHEN IT'S TIME FOR NO MORE SHOOTING AND STUPID CRAP BUT I LOVE SHOOTING CUZ IT MAKES ME FEEL SUPER COOL AND EXCITED IN PLACES THAT MY MOMMY TELLS ME ARE BAD BUT I DON'T CARE BECAUSE WHEN -- Whoa, I've gotta go, I've got a kegger tonight. Sorry, brah."
Platform: Nintendo Entertainment System, 1989
Know a terrible ROM? AAAAAAAAAAAAA.

Story: I'm not going into Clash at Demonhead's plot, because it's the kind of hugely intricate bullshit that makes Xenogears look like Pong. Of course, this is only if you count for inflation of the Needlessly Complicated Video Game Plot Index, or NCVGP: 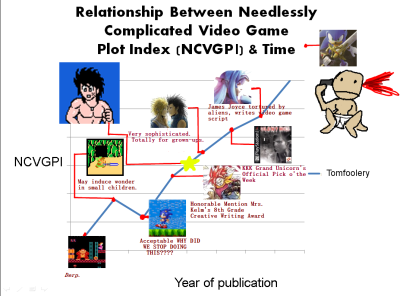 So as you can see, Demonhead is well ahead of its time. Also the protagonists are named "Bang" and "Mary," which I'm sure never led to any inappropriate impromptu humor in the workplace.

Gameplay: Wikipedia.org has this to say:

Although this is accurate, it's sort of like proudly announcing:

The game also takes a slightly novel approach in that you can choose which segments you'll play by planning out a "route." Of course, every last one of these brown lines is a barren skidmark of unimaginative running, jumping, and shooting. I'm assuming that when you get to the end a pentagram forms around your NES that grants you Dark Powers of the Apocalypse, as that's the only way I could imagine anyone playing to the bottom of this dirty underwear drawer... OF GAMES.