This isn't a picture from "Lord of the Rings", I think it's from another movie with the Gandalf guy also as a White Wizard.

This film marks the first installment in the new trilogy from director Peter Jackson and is based off the books of the same name which were written by JRR Tolkein, who wrote fantasy novels around the turn of the century. Lushly filmed on location in New Zealand the movie has an otherworldly appearance that transports you to the fantasy world of Mordor as imagined by Tolkein and realized by Jackson. The film begins in Hobbit Town where the white wizard Gandalf is bringing magical fireworks for the hobbit festival. There he encounters the twisted hobbit Bilbo Baggins who has been made evil by the power of the titular ring. Gandalf takes the ring away from Bilbo and Bilbo recovers quickly but it is revealed that the armies of the Orks are coming to get the ring.

That's where the action begins. Bilbo's son Frodo must journey with Gandalf to the elf city where the elves will help them decide how to fight the Ork army. It's a fantastic journey through the woods where they encounter Bog Wraiths who ride on horseback and serve the black wizard Sarumon. They manage to escape the Bog Wraiths with the help of beautiful Princess Arwen (Liv Tyler) who fights them off single handedly with her magic sword. The fight scenes in this part are very intense and young Frodo is even poisoned by the Orks, which makes for a harrowing journey to the Elf City. There they meet the guy from the Matrix who is playing Lord Elrond the elf wizard, who heals Frodo with his powerful magic.

A council convenes of the elf elders and Gandalf and several other dignitaries have been invited to attend the meeting. Gandalf interrupts the guy from the Matrix and says that they have to destroy the ring, which is pretty cool, but they have to take it all the way to Mount Doom, which on the other side of Mordor. They are supposed to throw the ring into the mountain and the lava will melt it. Now what's really dumb is they don't explain how it's going to destroy the ring or why the Orks want it, they just say throwing it into the mountain will destroy it. I remember in the book there were three chapters devoted to them explaining how the ring was forged and how it could be unmade in the fires of the mountain, but in this movie? Nada. I mean I knew how it would work, but anyone who was seeing the movie and had not read the book would be confused as all hell. 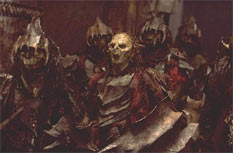 Here are some Orks about to cause trouble with the gang!Soon after Frodo sets out with his friends, known as The Fellowship of the Ring, and Gandalf confronts the black wizard Sarumon in his wizard's fortress. There is an intense magical battle and Gandalf is almost killed. In the end he is rescued by a giant moth that he commanded to do his bidding with his magic. In the book they explain all about the moth but it is just retarded appearing out of nowhere like that in the movie, no one knows why a giant moth is helping him.

Gandalf goes back to help them get to the dwarf city and more fights ensue with ravening packs of bloodthirsty Orks. Eventually the Orks are defeated but a larger threat appears in the form of Barlog, a massive fire demon reminiscent of Diablo from Diablo I. Gandalf sacrifices himself fighting Barlog so that the others can escape, because that's the kind of hero he is! But Sarumon is not out of tricks and he wants that ring so that he can rule all of Mordor, he unleashes the Uruk-hai warriors on the Fellowship. The Uruk-hai are sort of like Jean Claude Van Damme from Universal Soldier, they are supersoldier Orks and total badasses. Actually they look sort of like the Predator from the movie "The Predator". They kill one of the Fellowship (I'm not telling who) before they are finally defeated.

Then the movie just ends. This is a huge disappointment because it doesn't end anything like how the book ends. In the book Gandalf is back from the dead and they have defeated Sarumon for the first time, this movie is just, I guess a really big downer. It is pretty to look at, but it needs to get its facts straight and it needs to make a little more sense for those people who have not read the book.