The Hobbit: An Unexpected Journey; A Christmas Story 2; Sightseers

The Hobbit is upon us and it's up to Ian "Professor Clumsy" Maddison to give us the lowdown. After that we have holiday cheer from Joseph "Jay Dub" Wade, who endures A Christmas Story 2 (the official sequel). To close, Ian takes a tour with the hilarious British comedy Sightseers.

The Hobbit: An Unexpected Journey

EXPECTATIONS: I'm a big fan of Peter Jackson's Lord of the Rings trilogy and I'm really just hoping for another film along the same lines. Every piece of promotional material suggests that I will get exactly that, so I should be happy. Can this really follow on from the success of those films, though? That was.... my God! ...eleven years ago and it stood out as a unique, trailblazing vision at the time. Now that the trail has been thoroughly blazed, how will The Hobbit trilogy stand out today? 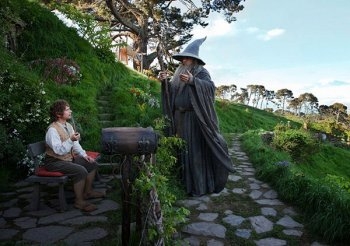 The portentous meeting, like when Jesus gave water to Ben Hur.REALITY: I can't help but feel slightly disappointed by The Hobbit: An Unexpected Journey. While it does have a smattering of the flair and charm that made The Lord of the Rings so good, there's just not enough of it. While well-paced and entertaining throughout, this film really lacks character. That and an ending.

On the eve of his 111th birthday, eccentric Hobbit Bilbo Baggins (Ian Holm) starts writing the story of his younger days. Flashback 60 years and we are introduced to young Bilbo (Martin Freeman) as he is visited for the first time by wandering wizard and infamous grumpy git Gandalf (Ian McKellan), who press-gangs him into joining an expedition of twelve Dwarves led by Thorin Oakenshield (Richard Armitage), the king of the Dwarves' lost mountain kingdom. Their mission is to reclaim said kingdom from the greedy dragon Smaug.

The plot is little more than a nudge out the door for the adventure-pining Bilbo, which is all you need for a film like this. Go out, do some good and learn something about yourself: It's a pretty well-trodden path for adventure stories where a literal journey runs parallel to a metaphorical one. In this case, the metaphorical journeys of Bilbo and Thorin are given more emphasis than the literal journey. That's all well and good in theory, but it leads to a somewhat unsatisfactory experience.

Few of the Dwarves get any kind of development, aside from looking unique. We only really get to know Thorin, Bofur (James Nesbitt), Balin (Ken Stott) and - briefly - Dwalin (Graham McTavish), Kili (Aiden Turner) and Fili (Dean O' Gormon). Out of the twelve Dwarves, those are the only five who get any screen time, and most of that is early on. Balin is especially spotty in that he is established as being one of the most important characters in the film at the beginning and then all but disappears before the end. It's a shame because Ken Stott is quite remarkable in these scenes and you start to miss him about halfway through the film. He's still there; he's just not doing anything. 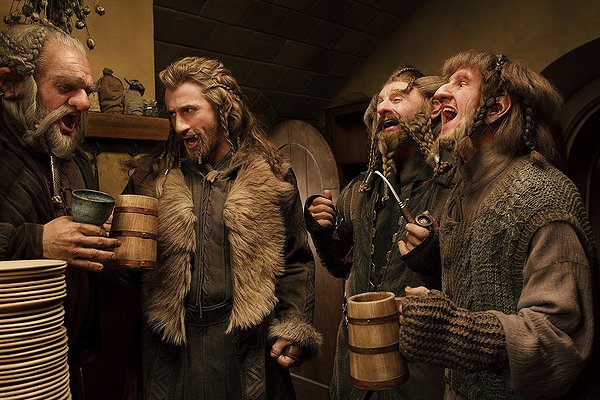 Dwarves doing what Dwarves do best.

I think a Robert Altman-esque approach would have worked better here. Just have every Dwarf talking constantly in every scene, to hell with narrative cohesion, especially as this film eschews that in favour of a thematically consistent, but narratively unsatisfactory denouement. This ensemble never really gets a chance to shine like I know it could. I don't think even Bilbo could name all the Dwarves in his company if Gandalf forced him to (like that weird scene in Haywire). It's telling that the best scenes in the film are the ones in which all of the Dwarves interact in Bilbo's home; throwing plates and singing songs like it's a Disney musical (and a good one at that). I just wish there was more of this going on throughout. It's easy to forget that a lot of these characters even exist after a while.

Instead of a strong ensemble feel, the group is mostly embodied by Bofur, and James Nesbitt's wonderful performance forms the emotional backbone of the film. It is through his interactions with Bofur that Bilbo gains an understanding of Thorin (and therefor all of the Dwarves) and earns his understanding in return. Unfortunately, The Hobbit seems quite intent on getting out from under the feet of its title character, as poor Bilbo also suffers from being barely present for long stretches.

You see, the main failing of The Hobbit is a similar problem to that of The Hunger Games, insofar as a great deal of screen time is dedicated to stuff that isn't going to matter until the sequels. We have a long sequence in which a wizard, Radagast (Sylvester McCoy), discovers a mysterious sorcerer called The Necromancer (apparently played by Benedict Cumberbatch, for what little of him we see) who infects hedgehogs and commands an army of giant spiders. This antagonistic presence is established, discussed at length by a bunch of returning cameos from the Lord of the Rings films and then immediately put on the shelf for later use. It has no bearing on any further part of this one film's story and as such is little more than a waste of time. All of these scenes with Radagast would be better suited to the prologue of the sequel, where they could neatly round off a plot that actually revolves around that character. 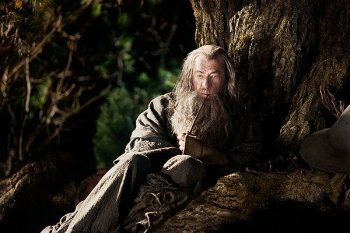 A wizard's work is never done... and this is why.The real antagonist of this film is Azog the Defiler (Manu Bennett) a pale orc intent on ending Thorin's line. Quite why he wants this is open to speculation. Perhaps he just hates the monarchy? Perhaps he just thinks Richard Armitage is a bit of an over-actor? Perhaps he wants to wipe out the physical realm and lead a CGI revolution? Either way, he's effective only in the Saturday morning cartoon sense: He's like Mumm-Ra or Skeletor, standing in his tower and demanding that his minions bring him Thorin's head for no real reason other than he's the baddy and Thorin's the goody.

It is not until about halfway through the second act that we are introduced to the strongest villainous presence in the film in the form of The Great Goblin (Barry Humphries, in an inspired bit of casting). While the Great Goblin captures and has some fun with the Dwarves, Bilbo is off dealing with the wiry Gollum (Andy Serkis). All of this stuff is wonderful and it ends far too soon. In a film of this length, it's a shame that the best stuff is quite far between. The third act then creeps up on you and before you even realise it was supposed to have been a climax, the film ends.

At its best, An Unexpected Journey is very, very good. In fact, it often comes close to the brilliance of The Fellowship of the Ring. The pace is fast and it certainly doesn't feel like three hours, but in hindsight, so much of that running time is wasted on incongruous detail. It's disappointing, and I think disappointment is hard to reconcile when the film itself is not bad by any stretch of the imagination. I actually think that The Hobbit may have worked better as a vision aesthetically removed from the Lord of the Rings films, something entirely its own that isn't battling with its tone to be a prequel to something else at the same time.

MINORITY REPORT: Based on Ian's review, I'm nurturing a theory: One's feelings about The Hobbit are directly tied to one's opinion of The Lord of the Rings trilogy. For instance, I've only recently been able to stay awake through, much less appreciate, The Fellowship of the Ring and The Two Towers. When applied to these high-fantasy adventure films, Peter Jackson's horror-comedy cinematic style -- largely dependent on oblique angles, quick-craning, tight framing and the heavy use of color filters -- always kept me at an arm's length from the material. This distance was compounded by Jackson's attempt to balance a dozen different major characters -- each with a history, each working for our empathy -- while condensing six books into three films chock full of references to events described in novels I've never read. That, my friend, is a narrative failure.

So color me surprised: The Hobbit: An Unexpected Journey is Jackson's best film since Heavenly Creatures. By expanding one slim book into three films, the narrative has room to breathe and incorporate relevant material from The Lord of the Rings novels and The Silmarillion. Fuck the fanboys who demanded The Hobbit move from page to screen unchanged; this is an object lesson in how to adapt an adventure novel set in a detailed fictional universe from the literary medium to the cinematic. While several of the dwarves are admittedly interchangeable, The Hobbit gives us fewer characters to empathize with, and this time around, they're revealed mostly through their actions instead of dialogue. With only one major hobbit, there's a significant reduction in the whininess and foodchat that so irritated me in The Lord of the Rings. And, finally, I got so caught up in The Hobbit, I forgot to check if Jackson's style has matured -- paradoxically, this is a good indication that his style has finally grown to fit the material. - Sean "Keanu Grieves" Hanson