Video Game Article has scored the mother of all exclusives, bringing you full coverage of everything that happened at this year's E3 a full three days before it even begins!

Read on to get the scoop on E3 earlier than anyone else. It's guaranteed to be just as much fun as mashing the refresh button in your web browser for three days, unless your refresh button is wired to a device that drops confetti from your ceiling every time you push it. 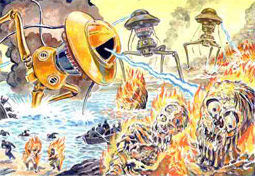 Getting acclamated to the crowds can be somewhat difficult for first-time attendees.Upon first setting foot in the LA convention center, I was immediately awestruck by the amount of sweaty, fat and awkward nerds that were packed on the floorspace. Why has no one ever written a single thing about these strange creatures in all these years that the conference has been running? You'd think that one or two articles would have mentioned them, the booth babes, and the lavish afterparties where people get ridiculously drunk. Maybe it's just because I'm not a professional, but I think these topics should be written about more than the games themselves because they are fresh and fascinating. It would never get old!

That aside, traversing the show floor was an interesting experience in itself. If you've never had the pleasure of strolling through Hell before this was about as close as you could get to that, only it was slightly more annoying because everything around me was either a bright light or a blaring speaker. Everywhere I turned there were elaborate booths depicting different video game settings with Disney World-like attention to detail. Take for example the large rock formation complete with a working waterfall for Tomb Raider, the sandblasted vault entrance for Fallout 3, or the L.A. highway system outside the convention center with its needlessly long travel times for World of Warcraft.

Then there was Kentia Hall, the floorspace for second-tier products which are so wacky that you need to be reminded of their wackiness each and every year. A Korean company selling Katamari Damacy-themed back scratchers? How delightfully offbeat! A guy selling hot dogs from a cart? What crazy products will they think of next?!

As is customary just about every year, a trailer for the upcoming Metal Gear game was shown before a packed crowd. In the trailer, an older Snake sneaks up on a tree and interrogates it, threatening to break its neck. The tree laughs eerily, then explains that in the past Snake has used pillars and other objects as cover while evading his foes, but now the hiding spaces themselves have joined forces with a mysterious organization named Founding Fathers to eliminate him. The words "NOWHERE TO HIDE" and "TRIGONOMETRY" then flash across the screen, providing new clues as to the direction of the series. The trailer ends with a tense standoff between Snake and an air vent, a silenced pistol shaking in Snake's usually sure and steady hands.

Upon the conclusion of the trailer, the audience roared in appreciation of Hideo Kojima's masterful storytelling.

The game I was most looking forward to was Wil Wright's Spore, an intriguing game that allows you to take control of a single celled organism and oversee its evolution over the course of time. After spending a great deal of hands-on time with the game I'm happy to report that it is everything I had hoped for and more. My only gripe had nothing to do with gameplay but a rather strange creative decision. It seems that no matter how you choose to evolve your organism throughout the eons, the end result is always a race of bipeds who look exactly like Ziggy Stardust-era David Bowie. Even if we are genetically predetermined to become a race of Bowies as has recently been proven by the scientific community, games are about escaping from reality. I'll still buy the game come release, but hopefully Wil Wright will bend and we'll at least get an Iggy Pop option.

On my way from an interview with Levelord to the D.E.A.'s booth, I was grabbed by the shoulder and roughly pulled into the 3D Realms private screening theater by none other than George Broussard himself. He explained that there was some incredible footage he wanted me to see, and I couldn't believe how lucky I was to be the only member of the press invited to this monumental event. While Duke Nukem Forever had been impossibly long in the making, I continued to hold out hope that the end result would be a fun game. I took a seat and leaned forward anxiously as the lights dimmed.

What followed was an hour long vhs recording of a women's college volleyball game from the mid 90s.

"What did you think?" he asked, a distinct pride in his voice. Before I could answer, he continued. "You haven't seen the half of it. No, really. I've got two other tapes with the rest of the game on them. Sit tight."

I'm not sure why I did it but I did stay, and I'll be damned if that wasn't the best women's college volleyball match I had ever seen. Broussard delivers, ladies and gentlemen. Don't you doubt that for a moment.

Part of the appeal of E3 comes in the surprise announcements that set forums across the internet abuzz with activity for weeks on end. Game companies like to keep their big projects under wraps and reveal them at the expo, where they will be guaranteed to pick up the most press coverage. This year was chock full of truly stunning developments.

Nintendo's next console is not actually going to be named Wii, that was just a joke so relax. The actual name is the Nintendo Kawaii Cutiepie.

Cliffy B.'s painful admission that he is, in fact, just a model that Epic Megagames hired to help on the public relations front. Cliffy has never successfully designed a single level due to a crippling depth perception problem which causes him to create maps that are half the size of the standard player models in his games.

Everyone hiding in the dark when I arrived on the second day of the conference, then jumping up and shouting "surprise!" in unison.

Diablo 3 has indeed been in the works, but it has been revamped as a "stealth-based demon avoiding rpg". In response to concerns that this new style of play might scare away gamers who enjoyed the intense mouseclick-heavy combat mechanic of the first two games, Blizzard assauged our fears by explaining that you will need to constantly click your character to stay hidden in Diablo 3.

When the Playstation 3 launches later this year, Sony will be skipping the middle man by sending all initial shipments directly to eBay sellers video_game_man_8982 and DongOfTheDead.

The new Tony Hawk game will be completely on-rails, freeing up the movement keys to trigger fart jokes while you mash the other buttons to chain 18 minute long combo chains.

Wrapping Up The Wrap Up

2006 was a terrific year for E3, but I can't help thinking that this year's conference would have really floored everyone if it had been held in 2000. Thank you for enjoying our coverage more than you've enjoyed reading anything in your entire life up to this point.