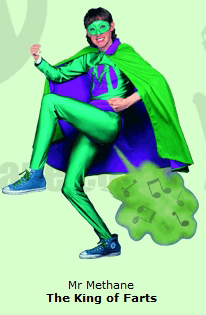 You know, for all their grandstanding about tea and the Olympics and the sun never setting on the empire, British people like some pretty fucking terrible shit. Ricky Gervais aside, it astounds me how the British are willing to dive headfirst into puerile humor at the drop of a hat. Don't get me wrong, I think a well-timed fart joke could potentially be funny (I've never actually experienced this), but I don't think I could ever be convinced to go see "Mr. Methane."

Let's be kind and assume for just a moment that all the highfalutin talk about Le Pétomane or whatever is mostly a gag. Mr. Methane doesn't really take himself that seriously, and he doesn't think that farting on command is an art. Maybe he thinks it's really funny, but whatever. The fact remains, there are still people paying money to see him fart. In these tough economic times!

So, yes, he has a site on which he details his "rise to 'fame.'" Most of his biography is dedicated to his careers before he started putting a microphone up to his ass, and so it transitions from straight-up boring to a bunch of gross terms for butts. I can't recommend reading it; I barely even skimmed it and I already hate this guy. Apparently you can book him for office parties or something, too. Get in line, I'm sure he books months in advance.

Oh, I forgot to mention that if you hover over a link, there's a fart noise. I'm sure you're all surprised.