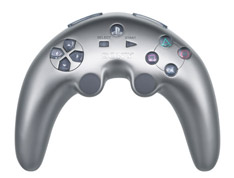 If there has been one glaring flaw in the overwhelmingly impressive glances we've gleaned of the Playstation 3, it has been the preposterously goofy boomerang shape of the system's controllers. Thankfully, Sony has announced that the controller displayed up to this point will be scrapped, and that a new design is in the works. Their team of ergonomic researchers and designers have already come up with some very interesting concepts such as a controller shaped like an upside-down "U", one which resembles a horseshoe with its ends slightly pulled out to the sides, and a particularly striking design that looks exactly like the original boomerang controller but is made of concrete.

Shortly after the news was released, Sony Computer Entertainment president Ken Kutaragi announced that the Playstation 3's controller will be 36 times as comfortable as Microsoft and Nintendo's offerings due to nanotechnology and long-division math. Kutaragi claimed that the controller was scheduled to be shown, but that it was so comfortable that the people transporting it from Sony headquarters "fell asleep while holding it on their way over here... because it is simply that awesome."

He then displayed seemingly unconnected cgi footage of a juggler keeping two bowling pins and a bowling ball aloft while getting beheaded in a guillotine, claiming it was "actual footage".

At this week's Game Developer's Conference, Nintendo announced that the Revolution will not only make it possible for gamers to download and play classic Nintendo titles, but Sega Genesis games as well. While this is exciting news, VGA's sources have reported rumblings from within Nintendo about major setbacks in getting the Genesis titles to function. Apparently, Sega's games from that era were specifically designed to do what Nintendon't, making the emulation process on Nintendo hardware inherently next to impossible.

Additionally, there are grave concerns over the Revolution's lack of a dedicated blast processing chip and the subsequent side effects this would have on titles such as Sonic The Hedgehog, leading a red-eyed and twitching Ken Kutaragi to announce that the PS3 has seven blast processing cores and that each is powerful enough to render a Pixar-quality cgi film in realtime with enough power left over to write an Academy Award winning screenplay for each. Kutaragi then cackled and disappeared in a flash of smoke, only to reappear in the center of the crowd disguised as a lowly fisherman.

Most of us wander through life aimlessly, hoping that fate will bring meaning and purpose into our lives. Alan Sparsky has always known his purpose: to play video games. His adept resolution of one virtual conflict after another guided his moral compass and filled him with faith that all was right in the world. On May 18th, 2005, that faith would be tested.

Having already beaten the 150cc editions of Choco Island II, Banshee Boardwalk, and Sky Garden handily in one sitting, Sparsky was determined to make a clean sweep by coming in first place on Yoshi Circuit to master the Retro Grand Prix once and for all. It was a Retro Grand Prix that would haunt him for the rest of his life.

Midway through Yoshi Circuit with a sizeable lead under his belt, disaster struck. Alan Sparsky's left thumb, essential for turning and crucial for pulling off the power drift move, became sore. Sparsky fell to the floor, crushing a World of Warcraft box and rattling a discarded bowl half-filled with Lucky Charms. This day in Alan Sparsky's world would not be lucky.

Amazingly, in an inspiring display of the human spirit in the face of tragedy, Sparsky did not let go of the handheld or stop racing. Though the pain was excruciating in its mildness, he knew that to give up would be a wound greater than losing the thumb itself, and that pausing the game would break an unwritten rule among true gamers. He would press on, though ironically the act of pressing was the core of the problem.

At great risk, Alan Sparsky not only won the race but set a new track record. He collapsed in exhaustion with a smile upon his face and did not wake up for four days. Those missing four days of his life were four days he would always remember.

Perhaps the greatest miracle of all wasn't that he escaped this harrowing incident without permament injury (though experts agree that nearly 100% of the people in his situation lose their thumbs completely when they place their thumbs in meat grinders), but that Alan Sparsky is still gaming today.

"If what I did made me a hero, then so be it." says the 27-year old pizza delivery man around a freshly opened can of Mountain Dew pressed to his supple lips. "Going through something like that and coming out gives you a new perspective on life, it makes you realize how quickly everything can be taken from you. You realize that nothing is impossible, that life is better spent doing than avoiding. I think I'm finally ready to take on F-Zero."

Elder Scrolls IV: Oblivion
There are as many intriguing and fun things to do in Oblivion as there are dollars needed to buy a computer that can run the game at its highest settings, but this open ended rpg is completely worth it. 10/10

Blazing Angels: Squadrons Of WWII
This gorgeous looking WWII-era air combat title makes it relatively easy to pick up and start flying while lacking enough compelling reasons to keep most gamers from completing the game, proving that this is a blatant training simulator for time-travelling terrorists. 7/10

CMT Presents: Karoake Revolution Country
Much to my disappointment, this game has absolutely nothing to do with Donkey Kong Country and is not horrible enough to justify the honorary millionth Nascar joke on Something Awful. 7/10

River King: A Wonderful Journey
After spending time with this game, you'll realize the only wonderful journey involving fish is the one that begins at the grocery store's frozen food aisle and ends on my floor because I'm such a klutz and god I can't believe I dropped my plate again. 5/10

Metal Gear Acid 2
This follow-up to the solid card-based strategy game is superior all-around but the inclusion of a 3D lens challenged my lifelong assertion that the world is flat, and for this I will forever owe Metal Gear Acid 2 a debt of gratitude. 8/10

Me And My Katamari
Shorter than its already short PS2 brethren and with half the number of analog sticks to control with, Me And My Katamari is perfect for those of you who were disgusted that the original games simply gave you too much for less money. 7/10

Metroid Prime Hunters
Though the title of "greatest handheld shooter" might be slightly more impressive than "world's greatest guy that lives in my house, which is only occupied by me", Hunters definitely deserves it with more of the gameplay you should already know and love from the GameCube installments of the series. 9/10

Tetris DS
Tetris wrapped in a shell of carefully calculated Nintendo nostalgia is still Tetris, and by default it beats every other puzzler out there. 9/10