The Complete History Of Video Games

I tend to think that everyone who plays video games is a bitter twenty-something with horrible hair like me, but for a whole generation of kids, the Atari 2600 that many of us grew up with seems every bit as ancient as one of those phonographs that had to be cranked for twelve minutes to hear thirty seconds of Thomas Edison humming. With that in mind, a comprehensive history of the hobby we share must be preserved for future generations. Long after you and I have gone blind from years of straining to see Chun-Li's cooch and our arthritic hands are no longer able to shield us from abusive nursing home staff, our children will read this historical account and glean all that can possibly be learned about their heritage.

1964
The first video game system is discovered by accident when an employee of Duncan-Hines experiments with a new cake recipe by mixing a circuit board with wood paneling. Disgusted by the taste of the resulting cake, the employee sells it to a young man named Nolan Bushnell. Realizing the potential use of his purchase, Bushnell dubs the device the "Car Horn" and prepares for mass production.

1965
Bushnell is murdered by a transient, and the "Car Horn" sits on a cluttered shelf in a local pawn shop for a number of months before being purchased by Johnny Atari. Believing the device to be a sculpture of his likeness, the vain young man dubs the device the "Atari" and prepares for mass production. 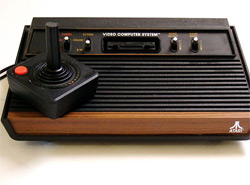 1972
After misplacing the factory in 1966, Johnny Atari remembers its location. He returns to find the factory workers long dead of starvation, but is pleased to find the initial run of Ataris intact. The units go on sale within a month, becoming a worldwide phenomenon.

1980
Pac-Man gains a small, but loyal, following among spiritual mediums with eating disorders.

1981
Shigeru Miyamoto develops an intense interest in the American Civil War. His attempt to translate this conflict into a video game results in Donkey Kong.

1985
Shigeru Miyamoto reads an article about an increase in suicide rates among the elderly. Months of research and interviews with depressed senior citizens inspire him to create Super Mario Brothers.

1986
Metroid is released. In an unprecedented move that empowers women worldwide, it is the first game to feature fully-functioning labia.

1989
The innovative Power Glove inspires a generation to realize that the sky is the limit when it comes to fingerless gloves.

1990
I buy a copy of Castle Of Illusion Starring Mickey Mouse and place the cartridge on top of a magazine ad for Sega's Game Gear, pretending to play the game by pressing the buttons on the life-sized photograph of the handheld system. I don't get a Game Gear that Christmas.

1993
Robin Williams gets to play a preview build of First Person Shooter and LOVES it. With his endorsement, the title becomes the best-selling video game of all time.

1994
Immediately after being plugged in for the first time, the only Street Fighter II arcade cabinet without a sticky medium punch button gets a can of Dr. Pepper spilled on it by an overly excited 22-year old high school senior cheering on the demo reel. 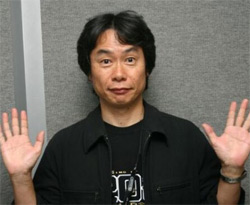 1997
Shigeru Miyamoto takes up gardening. Eager to share his newfound hobby with the world, the eternally imaginative designer creates Carmageddon.

1998
Game retailers worldwide are forced to update their return policy when hundreds of thousands of customers place disc 2 of Xenogears on the counter and ask for half their money back.

1999
Everquest launches, introducing the world to the addictive and rewarding experience of making fun of people who play MMORPGs.

2001
Sega announces its plans to stop producing hardware altogether, choosing instead to focus on completely destroying its credibility as a software developer.

NCAA Football 09
Online Franchise Mode and other improvements make this a solid installment in the series, but I'm worried that this game will be lost in the sea of this week's new releases. 8/10