The War for Lake Michigan 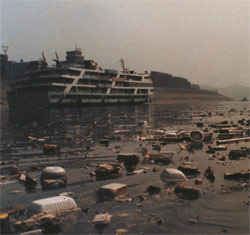 Come see China, where the rivers are as deadly as our pet food and toys!There is an understanding among first world nations and sometimes also the United States that pollution standards must be maintained to protect the environment. This understanding flips when it comes to the third world. It is perfectly natural for a company based in Europe or the United States to set up factories in a third world nation and ignore all environmental regulations that may apply back home. I suppose the thinking goes that the skies will darken and begin to smell like cat ass somewhere over in China, but the dirt-sucking Chinese will just be glad to escape communism and earn an honest 73 cents a day.

Everyone is reasonably happy. Western consumers have their three dollar Sponge Bob sandals made in a blackened hellscape and the Chinese workers get to enjoy a new corrugated tin roof to shield them from the liquid carbolic acid falling from the sky. They've got food in their bellies to offset the ecological disaster and we don't have to look at the possible repercussions because they're happening 5,000 miles away.

This summer, the equation fell apart on the shores of Lake Michigan, and Indiana and Illinois went to war.

The story of this war begins in the 1980s, when efforts began in earnest to reverse decades of heavy industrial pollution of Lake Michigan. Populations of fish and other lake life had been devastated by algae blooms, fishing had been all but banned because of mercury contamination, and there were even concerns that city water supplies in Chicago and other urban areas along the lake might become threatened by the quality of the lake water.

It's not an uncommon story in the United States. Lakes and rivers here have suffered many years of almost unrestrained dumping and some have caught on fire. You know water is polluted when it's flammable. EPA regulations had done some to ease this dumping over time and a long struggle to get regulators in Illinois, Michigan, Wisconsin, and Indiana on roughly the same page had brought some results, but people had to actively work to rejuvenate the environment.

For 25 years Lake Michigan and other great lakes have been slowly recovering. Hundreds of millions of dollars are spent each year to clean up pollution, test water supplies, and even engage in major engineering projects to improve the water quality and protect wildlife. The lake isn't quite as great as it once was, but it's getting better. Every year since these efforts began it has improved.

I'm sure a cynical percentage of you are rolling your eyes about tree-hugging hippies, but in Chicago the push to restore Lake Michigan has had broad support. You live next to a tar pit long enough and you eventually decide something has to be done. Every year brings new major projects and millions of taxpayer dollars spent to restore beaches or improve water conditions and most people applaud these efforts.

I'm not talking about saving whales or protecting some nature preserve I'll never visit in Alaska, this is our beach, our lake. Chicagoans have to live with it and we'd prefer to live next to a lake that can cool you off in the summer, not one that can strip chrome off a bumper. Think of it not so much as environmental activism (though it is), but as the large scale version of a bunch of people wanting their neighbor to clear a mound of trash and dead bodies off his lawn.

The bigger the better! Refineries beautify our Great Lakes!The first shots were fired in Northern Indiana, the blighted section of Lake Michigan coast that still pumps out the greatest volume of industrial pollution. Here the steel mills and refineries still dump in the lake, though over the years their emissions have been curtailed. In July of 2007 the Chicago Tribune published an article that revealed the nefarious scheme hatched by Indiana and British Petroleum, which maintains a large refinery in Whiting, Indiana.

Indiana regulators exempted BP from state environmental laws to clear the way for a $3.8 billion expansion that will allow the company to refine heavier Canadian crude oil. They justified the move in part by noting the project will create 80 new jobs.

Under BP's new state water permit, the refinery -- already one of the largest polluters along the Great Lakes -- can release 54 percent more ammonia and 35 percent more sludge into Lake Michigan each day. Ammonia promotes algae blooms that can kill fish, while sludge is full of concentrated heavy metals.

Whiting and the refinery are located on the border with Illinois and are sometimes considered a part of the Chicago urban area. Neither Chicago nor Illinois were consulted before this closed-door agreement was made. The first word the public heard on the matter was the July Tribune article.