Tuesday, Jan 31, 2006 by Dr. David Thorpe (@Arr)
In this edition of Your Band Sucks, the legendary (yeah, you heard me: LEGENDARY) World’s Greatest Dad Awards have been brought straight to the people like never before! Last time, I called for award submissions from my readers. I asked them to come up with their own categories, their own winners, and their own write-ups, meaning that I would have to do absolutely no work. Basically, it was a colossal failure. I got over three hundred entries, and I had to read them all, which was almost as much work as writing them myself!

And if you wrote something else that was really great and didn’t wind up in this article, let me console you: the first draft I put together was way too long, so I had to kick out a few entries even though I liked them. So how about you just assume that yours was one of the ones that almost made it. 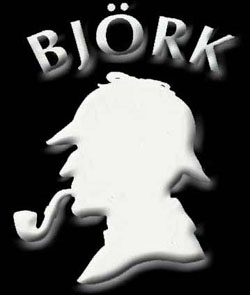 I found this image searching for "Bjork," and it seems strangely apropos.Every once in a while, a fairly well known artist will fall into obscurity without anyone taking much notice. Sometimes, nostalgic conversations will turn to "Hey, remember Pink?" or "I didn't know Jimmy Eat World was still around... That's neat."

But, when someone asks you, "Remember Bjork?", the answer should be a sudden shot of panic and a soft "Oh, shit", like you just remembered you havn't fed your girlfriend's cat in 2 weeks since she left town and asked you to take care of it.

The fact that no one knows where Bjork is, or what she's doing, is scary as hell. In a perfect world, some forward-thinking coalition of experts and concerned citizens would have tagged her to stay informed of where she is at all times, or followed by satelite, or her legs shackled, or tethered to a sign post, or something.

In a perfect world, I wouldn't have to sleep with a gun under my pillow, afraid that Bjork was going to sneak into my room and write a song based on the pattern of dead skin flakes that she'd find on my pillow.

But the world is not perfect. And now, she's out there. Somewhere. She could be anywhere. No matter where she actually is, its not a surprise, because she's Bjork. If she had a hit single or was part of a well known tour, we'd know what she's doing, and we'd know it was safe to turn our backs because Bjork was occupied.

And that is why Bjork wins the award for Scariest Absence.

There are a few errors in the title of Scott Stapp's new CD. First, 'Great' is not the right word to use. It automatically assumes that the music on the CD is of a high level, which it is not. A word like 'Shit' or 'God-awful' should've been used instead. Next up, the word 'Divide'. There is no way this album is going to divide anyone. They're going to hate it and wish death upon it. No two people are going to have different opinions about it. Both will say it's a turd hat. Finally, the word 'The'. I'll let that one slip by, but just barely. In conclusion, Scott Stapp's new album should've been titled 'The Shit Turd Hat'.

It seems like my generation (those born in the mid 80's) did not learn their lesson. After going through our teens, laughing about how awful the 1980's were, and how all of that stuff was completely embarrassing garbage and laughing at our older siblings about how in the hell they could ever walk around with a half bottle of hairspray in their head and listen to cheap Casio Keyboards, what do we do?

We bring it back, embrace it, and don't even bat an eye to it.

It seems like we can thank the Killers for this, but I had a feeling it was coming for quite some time. However, I feel much more inclined to blame the Killers for it, because it just feels right. The Killers, The Bravery, hell, the unwanted comebacks of Depeche Mode and Duran Duran... how could my generation allow this? Oh, right, because when I was 15, we allowed rap rock to be cool. I'm just afraid of what is to come, say, in the next five years, we see "uppa-class" women wear flannel Gucci bags as Kelly Clarkson covers "Would?" by Alice in Chains? Oh yeah, I called it. Somebody stop us. 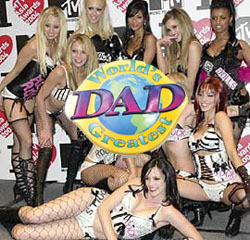 Jesus, how many people are in this group?I come from a time when pop was as pretty and innocent as a strawberry field; a time when our pop princesses came to us at the tender age of 15 with a head full of dreams and a body untainted by the world of success. As time has passed, the once ripe vineyards of girl pop have wilted and our glorious pop goddesses have become dried-up old prunes. Britney, Christina, Jessica - all fallen from the limb too soon it seems. Even the second tier teen sensations such as Ashley Simpson and Lindsey Lohan have become ragged and used-up. It's clear now that the path of life consists of a moment of pristine beauty followed by many agonizing years of ugly.

Whereas one, such as myself would believe that the future is now in the hands of the pre-teen hopeful Jamie-Lynn Spears, pop culture insists on holding on to the moldy image of late-twenty something pop artists. I don't know about you, but once fruit has gone bad I tend to throw it away, not take a big bite and pretend I'm loving it. The new pop world is a twisted and ugly affair currently ruled by the wrinkle-faced, greasy-skinned old-timers known as The Pussycat Dolls. The song "Don't Cha" reminds me of the first time I saw my grandparents having sex; a putrid mix of cold sweat, gummy saliva, talcum powder and my vomit.

Although violently wretched, it is heart-warming to see the old-timers still trying to act young again. The lyrics "Don't cha wish your girlfriend was hot like me?" have the same cognitive effect as seeing your grandpa wearing sunglasses; you know he's not fooling anyone, but his lovable toothless smile makes you feel all warm and fuzzy inside. Unlike Britney and Christina who aren't trying to fool anyone, The Pussycat Dolls proudly proclaim, "We're young and cool, just like you!" A whimsically light-hearted distraction until Ms. Jamie-Lynn grabs the mic and takes her rightful place at the thone.

Upon the release of 2005's Plans, DCFC were immediately disavowed as sellouts by the same kids who'd called them rock's saviours the previous year. This of course is not unusual for indie culture, but often there is at least some legitimate complaint, as slick new producers and hot-shit session musicians are brought in to fag up a band's sound just enough so some 17-yr-old mall troll will buy the cd for his sister's birthday. But with Death Cab, indie culture's back-turning rings exactly like the pompous, exclusivist whining it is--because every Death Cab record is exactly the same.

Plans is exactly the same formulaic mope-pop--about the horrors of being a white suburban kid with a bad haircut who's too chicken-shit to break up with your girlfriend--that it always was. It's got the exact same mix of songs about ambivalent, what-do-you-want-to-do-I-don't-know-what-do-you-want-to-do relationships, taking public transportation to nowhere in particular, being an old fart at 28, and even the one obligatory sympathy-grab song about death that you're supposed to look like an asshole if you don't like. But put it out on Atlantic instead of Barsuk, give the kids some nice endcaps in the Virgin Megastore, and prepare to get mauled by every emo twatcake in a track jacket and an "ironic" D.A.R.E. t-shirt.

On their website (deathcabforcutie.com), they stream selections from several of their albums spanning six years. I defy you to tell me where one album stops and another begins.