Suicide Silence might not be the worst deathcore act. Maybe it's the best. But the genre is so inherently worthless that there's not much difference between the two extremes, so I might as well pick on its biggest-selling band. 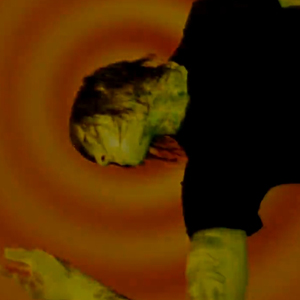 Singer Mitch Lucker descends into the vortex of suck.

Deathcore bands hate being known as deathcore bands. They rant about how labels are unfair, and they describe how they blend grind and death and hardcore in a really distinctive way, and they attempt to distance themselves from their stigmatized sub-genre by torching straw men. ("We're not one of those groups that likes being called deathcore. Fuck those guys!") This is the kind of thing that only happens to people who play shitty music. It's not the word's fault. If the term used to describe your work appears to be pejorative, you're probably doing something wrong.

Deathcore's main, and often only, ingredient is the breakdown, a stuttering procession of downtuned riffs intended to jerk the marionette strings on prancing troglodytes in band-name basketball jerseys. Think of the "Darkness imprisoning me" riffs from Metallica's "One," but remove everything else from the song -- the melody, the evolving dynamics, the tuneful vocals, the intelligent lyrics. While playing Suicide Silence's No Time to Bleed, a relentless barrage of chugging-guitar drudgery, I started pleading "kill me" again and again, like the invalid in the "One" video.

General-interest music fans perceive metal as stupid, but its practitioners and defenders believe it to be smart. Deathcore is a dumbed-down version of metal, which means that it seems moronic to discerning metal listeners and unfathomably retarded to casual observers. It's ugly, artless and crude. If metal manifests itself as an airbrushed muscle dude brandishing a sword, deathcore is like a caveman drawing stick figures with his own feces.

Deathcore eliminates most of the excuses used to justify metal's existence. It doesn't feature many guitar solos, which compromises the technicality argument. No Time to Bleed can't be described as "epic," because its tracks average three minutes in length. (It is commonly called "Br00tal," but this is actually a huge minus, given the brain-dead dude-bro demographic that issues this compliment.) All that remains are the stunted, violent aesthetics (T-shirt slogan: "Pull the trigger, bitch!"). Suicide Silence's heaviness sounds sloppy and untoned. It's like a morbidly obese guy who lacks the discipline to train for football, yet still feels entitled to tackle random people on the street. 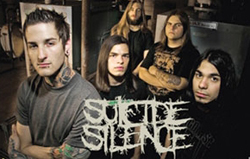 No Time to Bleed sold more than 14,000 copies during the first week it spent on shelves, which placed the record at #32 on the chart. The group's label calls this "a monumental moment in extreme metal history," adding "No Time to Bleed provides a substantial wake-up call to the masses giving today's youth an outlet to vent their everyday frustrations. Suicide Silence can identify with their fans and knows what struggles they face in today's society." Truly Suicide Silence speaks directly to the now generation. Here are some examples of the album's empathetic content: 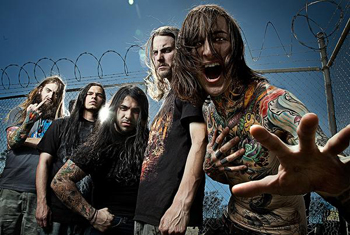 Behold, a band so hardcore that it spent the summer on tour with Mudvayne, Dope and Static-X.

Lyrically, Suicide Silence is uniquely familiar with the youth of today, but musically, the group is so howlingly generic that the dictionary entry for "deathcore" would just be a picture of them, facing the word with their middle fingers aloft. So it might come as a surprise that, according to the group's Wikipedia page, Suicide Silence won a 2009 Revolver Golden God award for "Most Innovative Band." In fact, the group took home a trophy for "Best New Talent." People actually altered the group's entry to mock its derivative nature. Note to Wikipedia vandals: The best way to keep your criticism intact is to make it so subtle -- and seemingly complimentary -- that the band's own idiot fans will overlook it.

No analysis of a deathcore band is complete without a trip to the merchandise stand. Suicide Silence doesn't appear to offer jerseys, but they do sell basketball shorts, women's underwear, and a girlie shirt described thusly: "Cartoon Angel Being Impaled & Splattered With Pink Blood Within Gears & Sawblade Art Above Logo." Clearly the decision to support Suicide Silence through one's choice of attire carries exactly the embarrassing consequences that it should.