History shows that the worst web comics cannot be made by one person, nay, it takes a village of idiots. From The New Yorker to Penny Arcade, time tells us that you need a terrible artist AND writer, and not just one person who's bad at both artforms. With that being said, today's ALOD is Dilbert for the mentally retarded. 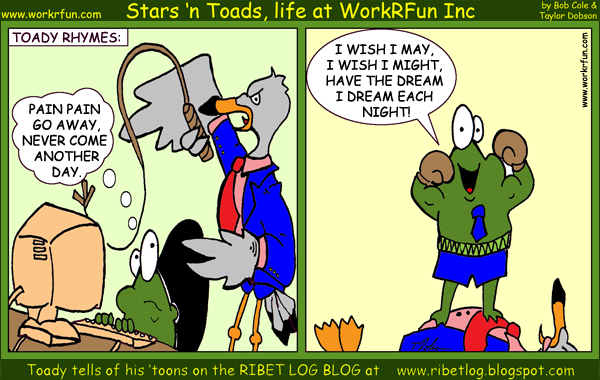 "Workrfun" consists of a sassy, frog like turdling who explains Office Life like it really is. Unfortunately, office work is incredibly boring, and Toady doesn't seem to take any effort to punch it up a bit. The rest of his co-workers are Stars, Cats,or angry relatives of Toucan Sam. It never bothers to explain why large bodies of gas are associated with celestial bodies of burning gas, nor what exactly it is they do in their workplace. I'm assuming it's those animal horoscopes you see at the grocery store. There's a blog too, to help the reader relate to Toady's hilarious ordeals.

"The bird is a VP and one of the better ones I ever associated with. People used to get so frustrated because they would track things to him but he would not have them and not recall them. What we figured out is that he put everything in one of three stacks on his desk. Each day the stacks moved to the left and the oldest went straight into the garbage. If no one came by to follow-up on a given piece of paper it simply disappeared. Anything routed for a series of signitures was particularly vulnerable. Of course, he just gave you the dumb/lost look if you asked him about something."

That was a joke, for those of you who aren't sure what Toady was explaining. Normally he has adds a disclaimer to such journal entries that they are jokes, like douchebags that add "finger quotes" in conversations they hold with people as an attempt to use sarcasm. My favorite jokes on the website? Probably the titles of all the comics on the archive page. They are so kitschy that you can't help but use them as daily affirmations, without a hint of irony. They include:


Words of wisdom if you ask me.
Know of an awful site? Send it to us and become a hero!