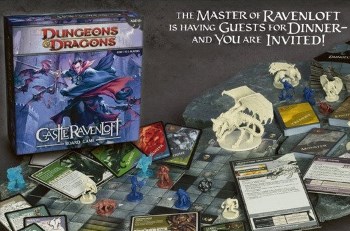 I've had my eye on the Dungeons & Dragons adventure system for a while now. It's a series of co-op duneon crawler board games with random map generation, which appeals to the part of me that likes Diablo and the other part of me that likes things which remind me of other things. There are four installments, each one with its own theme, a light campaign, and components that can be used with the other games.

During a recent sale, I finally caved and picked up Castle Ravenloft. This seemed like a safe bet since it was the first in the series, it had a ridiculous vampire on the box, and there were sure to be some plastic skeletons inside. Think about it. You're a skeleton. You find out there's a place called Castle Ravenloft. Can you think of any other spot you'd rather call home?

I also decided to buy the second game, Wrath of Ashardalon, because it had a big honkin' dragon on the box and I'm a compulsive idiot.

Now I own this gaggle of plastic monsters:

This photo was taken with a Surface 3, which follows the time-honored tradition of tablets that don't take pictures you'd ever want to look at.

Look at that nonsense. This is what I have become. There's no going back.

You start off with your heroes standing around on a dungeon entrance tile like a bunch of goobers. At the end of your turn you must reach one unexplored edge to reveal the next tile. If you don't do this, you must draw a Terrible Outcome card. I don't remember the actual name for these cards, but rest assured that something terrible always happens. Maybe a tunnel collapse causes a rock the size of a bowling ball to drop on your head, or you come in last place in a beauty contest.

Let's say you get to the edge of the current tile. Now you take the top tile from a shuffled stack and snap it in place, so it looks something like this: 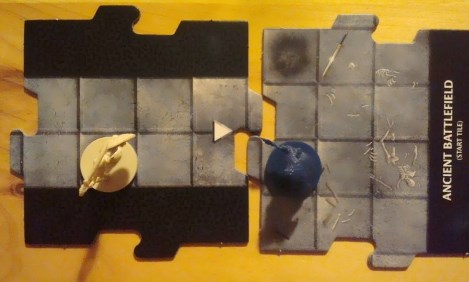 I'm the blue guy. Also, I'm the character on the right.

Since the tiles always line up you essentially get to solve the world's easiest puzzle every time you take a turn. This is exactly the confidence booster I need in my life right now.

Now you draw a card to see which random bad guy happens to be waiting for you. Since there's no dungeon master to control enemies, their character cards spell out how to move them around and use them to attack yourself. Some mindlessly charge towards the closest hero. Some plink away with spells or arrows. Some teleport to the busiest tile and rudely elbow everyone out of the way. None seem interested in my attempts to defuse the situation with observational humor about the US presidential race.

After a while you find some treasure, roll some d20s, use some of your signature class abilities, and flip over enough tiles to find the dungeon floor's exit.

The game's not quite what I imagined. Instead of scouring a dungeon by torchlight, you briskly jog through it, your party members politely nodding as they power walk in the opposite direction. Heroes only level up once, so you're not developing a characters so much as going super saiyan.

I came into this wanting something methodical. The Dungeons & Dragons name is evocative of thorough exploration, drawn out battles, parties sticking together, and long-term progression. That's not what this is at all.

Yet I find myself coming back to play. This is a game where you'll get kobold rabies, run from a skeleton while pleading for your party's cleric to save you, flip over a tile revealing a poison trap, and slide to a stop in front of a beholder, all in one turn. That's not just a good time. It's also my idea of the perfect date.