More Reviews from the Wasteland Chronicle

It's time to crank up the old Chron-E-Mail-O-Tron and check in with apocalypse survivor Donovan Laird in hopes that he will share his thoughts on the new-to-us Ashton Kutcher/Natalie Portman romantic comedy No Strings Attached. He also digs into the vaults to offer an insightful take on the timeless classic Son of the Mask, starring Jamie Kennedy and a dog. (Not to be confused with A Boy and His Dog, which is pretty much his life these days.)

EXPECTATIONS: Half the reason I got into this game of collecting and reviewing ancient cinematic artifacts is that I love seeing how you people used to live. Pre-Poc (Pre-Apocalypse for you lay-idiots out there) social norms: the taboos, the mores, all that fun stuff. It's fascinating to me. As similar as you people were to the way we are now, some of your customs are just goddamn weird. The Wave? Leaving tags on baseball caps? What is that shit?

Which brings me to No Strings Attached. This movie looks great. I gather it's a movie about the first people to discover the concept of Friends With Benefits. This will either be an eye-opening docudrama about one of mankind's greatest inventions, or ... no, there's no way this could possibly be another run-of-the-mill romantic comedy.

This is going to be great.

REALITY: As it turns out, No Strings Attached IS another run-of-the-mill romantic comedy. It takes that revolutionary concept and turns it into something that nobody cares about. For a movie that's solely about two friends trying to get off whenever and wherever they can, No Strings Attached is oddly obsessed with shoving these characters into a normal relationship. Ugh. You people. It would just kill you to make a movie that didn't go exactly according to formula, wouldn't it? Maybe that is what killed you, I don't know. I'm not saying that this is necessarily a bad movie, but as far as formula goes, this thing follows it to a bold, underlined T.

The film opens with an extended introduction where we meet Adam (Ashton Kutcher), just a regular guy in every way. Three times over the course of ten years, Adam meets up with Emma the Robot Girl (Natalie Portman). Emma probably has some kind of personality disorder: She frequently reminds people that emotions do not compute for her. That doesn't stop Adam from hitting on her at every opportunity. After discovering that his dad (Kevin Kline) is banging his ex-girlfriend, Adam goes on a drinking bender and winds up in Emma's apartment for no conceivable reason. The next morning, while looking for his pants, Adam hooks up with Robot Girl, who is now a doctor. And then they hook up again. And again. And again. And then after like the twelfth rendezvous, Robot Girl M.D. asks him if he wants to be her fuck buddy. Of course he says yes. That's when the relationship talk begins. 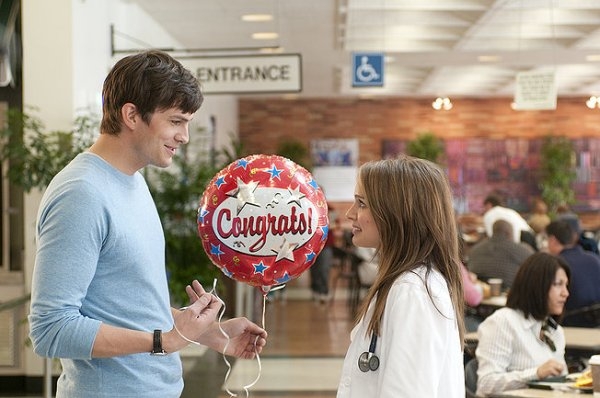 People in relationships give each other gifts, so I got you this balloon.

It helps that Kutcher and Portman have decent chemistry, and that Ivan Reitman knows exactly how to direct them. Hackneyed and obvious though this story might be, they sell it pretty well. What really doesn't work is everything going on around them. No Strings Attached feels like a sex comedy written by committee. There are several goofball non sequitur bits featuring nothing but secondary characters that add nothing to the plot, and only exist to pad out the running time. They're funny, sure, but they don't belong in this movie. Also, some of these characters feel like they should be in some kind of sketch comedy routine. Take, for instance, the producer who Adam works for. She's a typical "movie nerd." She's perfectly attractive, but because she wears glasses and never shuts the fuck up, we're meant to think she's this hilariously wacky weirdo of a character. She and two-thirds of the characters in this movie feel utterly interchangeable. Replace her with one of Robot Girl's roommates and you'd never know the difference.

Everyone except Kutcher and Portman acts like they're in some kind of hilarious farce, and the things they're given to do are written as utterly transparent plot filler. Scenes begin with a random character walking up to Adam or Robot Girl and saying "Hey, so did you [thing that happened in the last scene]?" It's like this movie was written with people who are chronically just returning from the bathroom in mind. 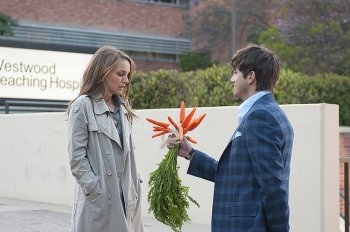 Okay, so you didn't like the balloon. How about some carrots?I'd applaud No Strings Attached for doing something fresh and original if it actually did anything fresh and original. It acknowledges that some people just like having sex and then has its characters act like that's a dirty secret. And then it suggests most people share that dirty secret, so it's really not a dirty secret. If Robot Girl M.D. were actually a girl who was actually a robot who was actually a doctor, then we'd have something fresh and original. Instead, Natalie Portman plays a grown-up version of her neurotic weirdo from Garden State. Ashton Kutcher plays a version of himself that's less of a doofus than usual, which almost causes him to blend into the background.

I imagine No Strings Attached was the kind of movie that couples and old people (and old people couples) flocked to in droves. It just smacks of that fake romantic vibe that people used to gravitate toward. They still do, in fact. It makes me want to try courting my own robot doctor. Sure, it's just a tin can with a voicebox and a bonesaw for a left hand, but if I found the right wig...

MINORITY REPORT: According to the trailers for this movie, it's really dangerous to have sex with your best friend because it causes you to forget everything you knew about each other beforehand. Then again, I can't say I'm surprised that "memory loss" is one of the symptoms associated with sleeping with Ashton Kutcher. - Martin R. "Vargo" Schneider