The Stampede, submitted by my fine self. I know that the fetish of riding people around like horses while they are dressed in bondage gear is an old and profitable one, but the folks over at (surprise) San Fransisco's The Stampede bring a whole new element of horror to the already terrifying practice. 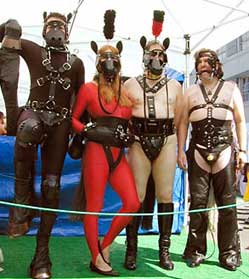 Animal roleplay is a form of fetish play that involves an exchange of power, typically between a human "trainer" and another who assumes the role of an animal. In ponyplay, the animal is a "human pony." Typically the pony is required to perform actions that a pony would perform, such as running on a lunge line, pulling a cart, carrying a rider or being groomed, inspected and shown. Ponyplay is not about abuse, non-consentual play, or bestiality.

Oh, hooray. I wish that I could "exchange power" with these people in the form of my foot making hard contact with their faces. I would also like to groom and inspect them with acid.

These fine uostanding citizens have a gallery of horrors on their wonderful website to peruse at your leisure. Be sure to say "hello" or "neigh" or whatever to their members list or join one of their exciting email lists where they will instruct you on the best bridles to wear for that special night on the town. Maybe you can even set something up with them so that when the time comes for these rearing stallions to shove their meaty horse-cocks into your quivering anus you can wear your very own retarded-looking horse mask and they'll ride you off into the fat sunset. Fags.