WhaleRider, submitted by Brian. If Jesus came down from high and took the time to ask me "Zack, what is your single favorite thing all of creation?" I would absolutely have to answer "pictures of naked obese men engaged in homosexual activity with the faces of rotund stars photoshopped crudely onto their bodies." If Jesus then asked me the follow up question of what my favorite web site related to this subject was I would most definitely answer "WhaleRider".

I expect Jesus to either slap me or begin crying at that point. 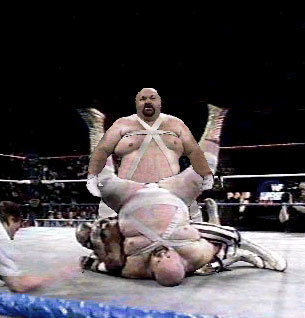 I haven't watched wrestling in at least 5 years, and boy am I regretting it now. I had never seen Bastion Booger jiggle his fat stuff on the mat. I love the outfit. It shows off his breasts divinely. Now how many of you would pay to see Booger go f_ _ _ himself like this gif. Oh baby. Which would you rather be? The Booger on top, or the Booger down below.

AAAAAAAAAAAAAAAAAAAAAAAAAAAAAAAGGGGGGGHHHHHHHH! That one isn't even pornographic! Alright, so homosexual chubby chasing isn't exactly the most bizarre fetish we've featured here, but good Christ there is a picture of John Goodman jacking off Chris Farley on the opening page. All of the laughter turned to tears in a matter of seconds.