Tuesday, Dec 24, 2002 by Rich "Lowtax" Kyanka (@TwitterHasBannedAllMyAccountsEver)
Know of an awful site? Send it to us and become a hero!

GOD'S WEB, submitted by Boogaloo. Hey gang, I bet you didn't know God had his own website! Well he does, and it's just about as cryptic and confusing as the Bible itself, although the Bible lacked pink, randomly sized fonts which look like some kind of retarded alphabet rodeo. GOD'S WEB has approximately 100,000 pages, each one more confusing and perplexing than the previous. I think the overall theme behind this quality Internet destination is that this "God" guy is one okay-Joe, but I'm not sure. Let's copy and paste a section of text to figure this enigma out, shall we? 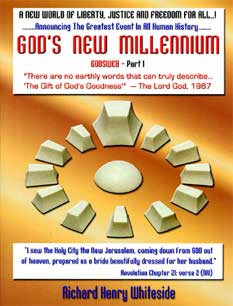 What did happen on May 1, 1967 ? It actually happened to me, a forty-one year old (at the time), married man. I had just arrived home on a Sunday night April 30, 1967 at about 10:30 p.m. from working as a truck dispatcher in a nearby town. It had been raining and had just quit. I unlocked the front door of my home in Visalia and found my wife and two young children all sound asleep in their bedrooms. Only one light was on in the living room. In the kitchen and on the refrigerator door, was a note from my wife. It said to put the food, wrapped in foil inside, into the oven and heat. This was to be my Sunday night dinner. So, after eating in the kitchen, I let my small toy poodle dog into the house, from the garage. About 11:30 p.m., I wasn’t sleepy, so I sat down in my easy chair in my living room and decided to read for awhile. I took off my work shoes and then my dog jumped into my lap and promptly went to sleep. I picked up a Bible that was given to me years earlier. I began to read Genesis, about how God created the *earth. (*Note: Although I was a confirmed member of the Episcopal Church, I had not read out of a Bible in several years. Also, I had not attended church for several years.) Two days earlier, a fellow employee at work asked me, If God created everything, who created God ? I told him that you cannot measure God, He is infinite. That would be like a mathematician trying to measure infinity.

As I read along to page 18 in Genesis, about the six days that God took to create everything, including the earth __ suddenly, as I read I noticed something strange about my dog. She woke up and stood up in my lap. She was looking up at the blank wall ahead of me. Gi-Gi was waging her tail very fast and her eyes stared frozen looking up at the wall ahead, a distance of about fifteen feet. Suddenly, the dog froze stiff and with her tail between her legs, she jumped off my lap and very slowly walked along the adjacent couch. After walking along the full length of the couch, she jumped off and hid out of sight, behind it. Then in a few more seconds, I felt something radiating through the wall and coming toward me. It was absolutely the most satisfying and supremely unique radiation that I had ever felt in my lifetime. It was the radiation of GOODNESS coming toward me. I immediately knew it was God Himself. He was invisible but the radiant energy of His GOODNESS outlined the size of a tall “human shaped” figure. To be sure, this was no human, but God The Father Himself who was approaching me. I thought to myself, this is happening to me ? Believe me, His GOODNESS makes you feel very dirty and unclean and extremely humble in His presence. Absolutely, there is nothing on earth to compare with the feeling I was receiving. He approached closer and closer and the feeling of GOODNESS was absolutely OVERPOWERING, and I barely could keep conscious as He stood upright directly in front of me. Then I felt the radiation from His Arms rise in front of me, and the GOODNESS in His Hands moved to directly over my head and paused. I remember saying enter, and His Hands touched the top of my head. GOODNESS poured into the top of my head and continued down through my body and into my toes. “I was full of GOODNESS…!

Er... woah. So Toy Poodles are trained God detectors, prone to go off when God decides to walk through your walls and make you want to take a bath? Makes about as much sense to me as an entire section devoted to the buffet center at God Central:

THE WORLD UNIFICATION CONGRESS (WUC) is located at the center of THE NEW HOLY CITY...
THE WUC SKY-DOME RESTAURANT is located on the top section of the WUC Building. It has a triple decked floor area of over one million square feet...! It will seat over 100,000 customers at one time. "The floor and the walls of the restaurant are like pure glass, like unto crystal..." (Revelation chapter 4, verse 6) All the food and beverages served in the SKY-DOME RESTAURANT are to be free, to all members in good standing. WMF will pay for everything served. The restaurant operator will be paid directly from The WMF General Fund. (See Isa. ch 55:1) All food and beverages will be served in disposable containers. Also, food will be sent through pneumatic tubes, from the SKY-DOME, to all city buildings. These pneumatic tubes are to be buried underground, in a large network that sends out food and drinks in all directions.

Pneumatic food tubes for God? Sounds right to me! Give me my damn free Toy Poodle and get me on the fast track to God right now! If a God-detecting dog and pneumatic tube food system wasn't enough, there's also The World Monetary Fund (World Trust) System which ranks every country based on... well... uh, something. I don't quite know, but Iraq isn't doing so well with that "666" bold red rating and all.

PS: God has a guestbook you can sign. Every fifth entry receives a free God-sensing Toy Poodle and access to the Food Tubes(tm)!