HOLYWAR, submitted by Bowie. When I hear the phrase "holy war," I immediately think of muslim jihads and turban-toting people with fertilizer bombs blowing up busses, because I am a racist shit. Imagine my surprise, then, to find out that the holy war in question here is targeting me! This doozy of a site is the homepage of an ultra-super-insanely-Catholic war against the Jews, wherever we may hide. These wackos actually think that they are better Catholics than the Pope. In fact, they list a hundred and one reasons specifically stating why they are better Catholics than the Pope.

See, it's like this. We Jews not only killed Jesus, but we had so much fun doing it, if he came back to Earth we'd sharpen our horns, polish our hooves, grab our pitchforks, and go do it again. We are the ultimate evil. But hey, no one's perfect. Actually, anyone who isn't Catholic - their brand of Catholic - is going straight to hell, but the Jews get the hottest coals shoved up their asses. Apparently, all faiths other than Catholic, including other Christian faiths, all worship the devil, whether they know it or not. Jews, however, they intentionally worship Satan. That came as a surprise to me, since in all my years of Hebrew school, I never even learned that we had any remote fucking concept of Satan. I also never learned that my Jewish heritage means that I'm part of the International Racist Jewish Mafia that controls the world. What a boost for me! It turns out that every good thing that has ever happened in my life was not the result of hard work and dedication, but rather because the Jewish mob bosses who look out for all Jews everywhere in the world applied their evil Jew power. Gee Lowtax, I sure hope Don Vittorio Schleshenbaum didn't break too many of your bones when he forced you to give me this job! Although it would be nothing more than you deserve, gentile pigdog! 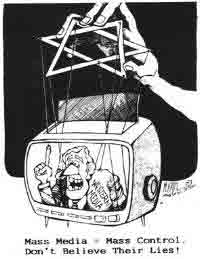 The Hidden Hand or The racist jewish international Mafia, exercices a
total influence on the affairs of the world, their secret racist jewish
goverment is responsible of all evil, dirty and blody work
unimagible to our knowlege. For those who ignore it everything is a
"mistery".

To illustrate their satanic power, I illustrate some of the racist jews
who are members of this Mafia
working in in high positions. But nobody will dare to tell the TRUTH!

Mmm... that's good crazy! I cannot stress enough how batshit insane this site is. My favorite part is when they make up ludicrous statistics to try to prove that there was no Holocaust. For example:

Most religious nutballs that appear to be hatemongers claim they are preaching a message of love. These freaks openly admit that they hate other people. They insist that the Bible instructs them to hate Protestants, as well as us messiah-murdering Jews. I beg of you, go to this site. It has to be seen to be believed. Be sure to turn your speakers up so you can hear the chanting while you watch their indescribably creepy videos of Jesus on the cross and crucifixes crushing the Star of David. Then read, read, read. I guarantee you, even if you are a devout Catholic, you will find something on this site that expressed hatred toward you as an individual. Hell, reading this site is a damnable sin. Oh well. At least we'll all be together in the Great Pit.