Galactica.One, submitted by Riley. This fine online establishment is home to the "God Force" of the "Extra-Territorial Intelligence." If you're like me, your first and second response to that is unintelligible "wahhhhhhhhhoohhhhhuuhhh" sounds. But that's just because the scope of this site is so big, you really can't comprehend it unless you're one of the few unique people on this Earth to be gifted with insanity. At the heart of this zany belief is Allen Michael, the spiritual Arthur "Fonzie" Fonzarelli of the universe. 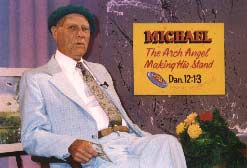 Wassup guys, it's me, president of Galatica!

Allen Michael is a spiritual master from Galactica whose channel operates in cosmic consciousness, in synchronicity with the Universal Mind. His mission as "the Comforter," is to make Michael's Stand with the people, bringing the planet thru its karmic cleansing and cosmic initiation into a utopian space age paradise.

We bring you great news of how to create a New World of absolute freedom, security, and abundance for all people. Without spilling a single drop of blood. So take in the channelings on this website with an open mind. Use your spiritual intuition. ETI Contact is telepathic, in us and with us as God's Spirit.

Wow, that is powerful truth-reality for sure!

The consciousness of all souls in Galactica is one with the multi-dimensional, holographic, Cosmic Intelligence that IS the Universal Mind: the all-knowing source of spiritual truth that is God - the Grand Order of Deuteronomy. IT IS ETI - Extra-Territorial Intelligence. Universal Love. Infinite Truth.Welcome to Eternity. This is the road to paradise.The 12-D Universe is non-linear. So, when reading these channelings, allow your intuition to guide you in gaining your own telepathic access to higher Intelligence.

Here is a channeling by Allen Michael, explaining the overall mission:"The mission Omni God has sent me to fulfill with the souls here, in and out of bodies, is to begin building the actual kingdom that Spirit God has promised would come, where the planetary people have a utopian world, with no war, crime, disease, poverty or mortal death for one thousand years. This is the time necessary to complete this planetary project, with the last soul redeemed, restored to an eternal body and returned to normal Universe.

I don't know about you, but a multi-dimensional holographic God sounds pretty awesome to me. Holograms have a long history of kicking ass and being wicked cool, especially when they are of a time traveling cowboy. The amount of incomprehensible madness on this site is quite abundant, and comes in many delicious flavors. In particular, this entertaining radio discussion complete with references to the Illuminati, Baal-Lucifer's control of King Solomon and members of the Rothschild family, and the dangerous Zionist Group (the REAL Axis of Evil!). There is even some talk about a young handsome black boy who looks like Michael Jackson. Here, have some more madness!

Spirit God controls all nuclear weapons, so there is no danger. Spirit God's intervention through Galactica ends all war. Not with weapons, rather with benevolent spirituality that is indisputable. No one will resist God's Kingdom when it is offered to them, especially Baal-Lucifer. That soul is no longer lost in an illusion. However, he is still under his own heavy karma, and resides in his place as the behind-the-scenes leader of the Elders of Zion. From that place he exercises control over the usury capitalist world, principally through the FRS and IMF. Nevertheless, he is forgiven as well. Spirit God has healed him, and returned him to a body at this time to play a positive role in eliminating money altogether.

Sounds good! Just tell me who to shoot with my mind lasers!

When the PSI energy phase disconnected on automatic circuitry, before the "infection" could spread, the solar system overheated and blew out in a great catastrophe. This left the 24 billion entities spaced out of their eternal bodies, floating in the astral aura of the solar system, their etheric circuitry damaged. All consciousness, which resonates in the etheric space of a solar system, was burned away.