Julie the Clown, submitted by Mike. This is definitely one of the more (not most) disturbing clown sites I've ever seen, because I can't quite tell if it's pornography or not. On the one hand, it's a lot of messy slapstick clown comedy, which I won't say I condone but hardly find obscene. On the other hand, it's some kind of sick fetish site for people who like clowns, scantly clad women, and lots of liquids.

My first slapstick routine sees me dressed in a tutu demonstrating all the traditional clown slosh jokes. See me get plastered with lots of custard pies, raw eggs, buckets of paste and giant clown-style comedy cakes.

Whahhhhhhhhhhhhh? Julie seems to have some serious issues and a strong desire to be humiliated by clowns in nasty ways. She and her partner are definitely the kind of entertainers you want to perform at your child's birthday party.

A lot of adults won't admit it, but they find slapstick comedy funny as well - especially if it's combined with a little bit of harmless sauciness. Here I perform some adult-orientated slapstick in the tradition of Benny Hill or Carry On.

Sauciness indeed! Boy howdy, I could just watch decadent clowns act out their forbidden fluid desires to the tune of "Yakety Sax" all day! In particular, the day I plan to blow my brains out with a homemade potato cannon. 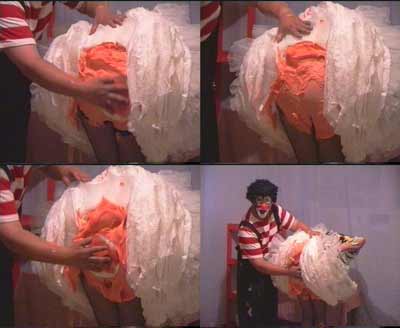