Abelard, submitted by me. You've got to admire a man who is sexually attracted to horses and isn't afraid to show how deep his perversion runs. By "admire" I of course mean fear – the kind of fear that motivates people to grab their torches and throwing stones and dish out a little brutal but morally correct mob justice. "Abelard" isn't just turned on by erect horses; the poor bastard likes all sorts of dreadful creatures. Yes, he's a furry, as if that redeems him in anyway.

When I was little, I liked to draw horses very much. Not that I was good in it, but I enjoyed it. I was reading lots of comics, so I tried to draw something from them - without much success. I could newer draw a human face (and I still can't). The first time I came upon furry art was when my friend got the internet access. It was four or five years ago. I think it was Peter Torkelson's art, which I accidentally stumbled on. After that, it is all history :) I've decided to become furry artist, so here I am. I am quite surprised, since I usually like to start things and then quit after some time. Unfortunately, I don't draw as much as I would like to. It is not that I don't have enough time, it's just that I am a little bit lazy, that's all. I need quite of time to finish a picture. I redraw it many times, ink it, scan it and then color it on my computer. By the time I get to the coloring, I am sick of it and want to get rid of that picture as soon as possible:)

Somewhere in that gibberish he mentions that he decided to become a furry artist. I'm not sure how you can run "furry" and "artist" together and not bankrupt either one or both of those words, but I'm hardly the Pope of the English Language so what do I care. The important thing is that this doofus thinks the putrid and immature scribbles he poorly colored in Photoshop count as art. Yes, some day museums everywhere will be full of brightly colored renderings of horse cock, much to the delight of snooty art connoisseurs everywhere. When that day comes, Abelard will be especially celebrated due to his ability to mix shitty 3d with his ghastly drawings. As with all furry art sites, I recommend you avoid reading it unless you like looking at some weirdo's secret fixation with drawing horse penises. But just to entice you, here's one of his none-pornographic pictures. I think it speaks for itself: 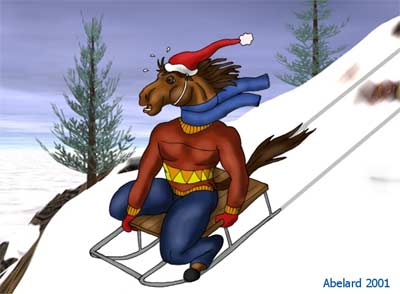