FCoS: Corpus Mufasa Chapel, submitted by Spongebob. I remember one evening at school when I was having dinner with a group of friends in the cafeteria. Dinner was always a great part of the day, when we'd all take an hour or so out of our busy schedules of drugs and constant sex to spend some quality time together. On that particular evening, our casual conversation became a debate over what was the best Disney movie. The table quickly became divided into two camps. One side, my side, said "Aladdin." The other side maintained that "the Lion King" was tops. The correct answer, in retrospect, was that we were all idiots for wasting a forty-thousand-a-year education arguing over whether Aladdin or Simba was the more charismatic protagonist. Now, if, instead, we had let the simple discussion become a bloody feud and we were all severely retarded, then perhaps the "Lion King" supporters might have developed a website that could come somewhere close to rivaling the unfathomable stupidity and pointlessness of this little beauty.

The First Church of Simba (or FCoS) is defunct now, but one of its branches, the esteemed Corpus Mufasa Chapel lives on, perpetuating its wholly unhealthy and unreasonable obsession with "the Lion King," as well as a number of amusing misspellings of the word "chapel." Jason Ahrens, A.K.A. St. Ahrens, A.K.A. Kovu, whatever the hell that means, is in charge of the holy chapel. Now, you might be asking yourselves, "just how does someone become so obsessed with 'The Lion King' that they have to make a church out of it?" Well, luckily Kovu answers that question. At great length. In fact, he goes on for about fifteen hundred words just on the experience of seeing the movie for the first time. Here's a taste: 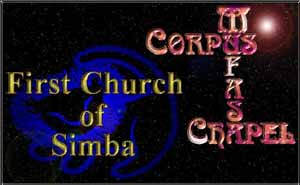 Well, the movie was put in the machine. I got comfortable on the floor (a habit I've had since I was 5 or 6) and the crickets started chirping and a lion roared. I barely moved a muscle for the entire movie. I was on an emotional roller coaster for the whole show. From Simba's presentation to the elephant graveyard. From Mufasa playing with Simba under the stars to Mufasa's death. From Simba with Timon and Pumbaa to when Nala showed up (for a very definite reason elaborated later). From Simba returning to Scar's confession, and finally to the presentation of Simba's child.

I related very well to the movie. Much in the movie I had also done. I wasn't held over a cliff above throngs of animals when I was born (I don't think) but much of the rest is parallel. Playing with father, camping under the stars with friends (although mine are named Alex and Maurice), and some others.

Many people find it odd that the Can You Feel the Love Tonight sequence affected me so much. This is quite easy to explain. I had been living the same sort of thing in my life at the time. Both of my best friends had found girlfriends, leaving me alone. Timon saying "I can see what's happening, and they don't have a clue" really struck me hard as I realized my friends didn't have a clue that they were alienating me so much. Perhaps this explains a lot about what happened after as well.

The movie ended. My dad said "That was good" and we all agreed. I went to bed that night, a little depressed from the movie, but nothing I hadn't experienced from some other movies. I didn't realize what had begun that night, how my life had changed in that hour and a half.

The Chapel of Mufasa offers so much more besides Kovu's story. Well, no, actually it doesn't. There's another section of the site which is also devoted entirely to Kovu's story. There are also some links about gay and lesbian lifestyles. I actually wasn't going to mention that Kovu's gay, but I suppose there's no point, since he goes through all the trouble of bringing it up whenever and wherever possible. I was, however, going to mention that he's a self-proclaimed furry and has several links to furry sites. How lovely for him.

My personal favorite part of the site, by which I mean the part that most makes me want to start fires, is Mufasa's Quote of the Day. Started in 1995, the quotes stopped coming in 2000 and now reside in a sizeable archive. Here's the thing: Mufasa can't possibly have a quote of the day every day for five years. "The Lion King" is about ninety minutes long. Mufasa dies about ten minutes in. Sure, he comes back to deliver advice for the sky, but even so, the guy has maybe twenty-five lines in the entire movie. Even if they were all golden nuggets of wisdom, the source material for those enlightening quotes of the day would run dry pretty damn quickly. Well, Kovu is aware of this, and he admits that a lot of the quotes are actually from other people. Okay, fine. There may not be enough Mufasa quotes to keep something like that going for five years, but there are certainly enough good bits of advice out there to fill the rest of the space. I find it a bit confusing then, to see that a whole hell of a lot of the quotes aren't just poor, many of them don't even make sense. Here's a helpful hint for all of you web gurus out there who want to make quote of the day lists like this one: not everything said by a famous person is automatically gold. Van Gogh was a great painter, but he was also a crazy jerk with severely limited interpersonal skills. No one is going to benefit from something that he accidentally spewed out while drunk one night. Just a tip.