Rap Snacks, submitted by Lil' Choo Choo. I'm not afraid to say that as a nerdy white man I do not always understand black rap culture. One perfect example of this is "Rap Snacks", the rap-themed line of snack food that has been around for a few years which would lead one to believe it's either funded by the government or at least moderately successful. Their web site is a shitty Flash travesty featuring a long and nonsensical introductory animation in which shadowy figures get totally up in your shizz by climbing ladders and breaking windows to grab yo snackz! 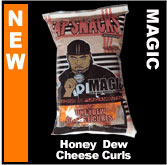 Ignoring the fact that Honey Dew Cheese Curls sounds like the worst idea for a chip flavor ever, Rap Snacks have somehow harnessed the incredible branding power of putting fairly unknown rap artist's pictures on the front of bags of chips. Personally I can't imagine myself being drawn to the delicious flavor of "BBQ Pop Corn" by the grinning face of Big Baby Jesus. While I guess the same could be said for the stupid mascots used on most food items like Tony the Tiger and the Honeycomb ball of fur or whatever it is, at least those are tailored to their product. I can't visualize someone coming out with Emo Band Ice Cream with various turtleneck-wearing pasty-skinned whiners slapped on pints of ice cream. Oh wait, Ben and Jerry's. Point taken, self.