Tuesday, Jul 22, 2003 by Rich "Lowtax" Kyanka (@TwitterHasBannedAllMyAccountsEver)
Know of an awful site? Send it to us and become a hero!

The 10K Commotion, submitted by Magenta. Everybody out there in Internet-land knows how much I love webcomics. In case you don't know how much I love webcomics, let me explain how much I love webcomics: I fucking hate them. That should clear things up for everybody who were either previously confused or retarded or both. It is my opinion that anybody can create a shitty webcomic, and anybody does, which is why we've got so many stupid websites devoted to the wacky antics of two MS Paint computer-lovin' teenage guys who play Counter-Strike and make acerbic comments about the Xbox before joining their furry friends on a spaceship which is piloted by a unicorn who can transform into a dragon or tank. "The 10K Commotion" combines shitty webcomics with the ever-so-popular "I want to draw anime but my advanced case of Down Syndrome prevents me from doing so" art style that permeates every goddamn nook and cranny of all original online art. Now combine that with a cast of boring, bland, one-dimensional kids who play "Dance Dance Revolution" and you've got something which should be illegal in all 50 states and that one island that I think the US owns but refuses to acknowledge it because the inhabitants are always shooting and stabbing each other all the time. 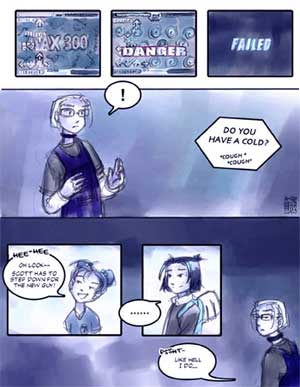 Through college, everything in life changes so this manga is really just about 10 characters who have one thing in common and are destined to collide in front of thousands of people. They meet dozens of other players, both allies and enemies but it's no secret that The Platinum Mark and Team Psyclone will face off before it's all over. Who will win in the end isn't as important as how they'll get there.

OH WHAT A THRILLING AND EXCITING JOURNEY INTO THE COLORFUL HEART OF ARCADE MACHINE DANCING!!! I wonder how many restless nights I will lie awake in bed, worried if The Platinum Mark will be able to defeat Team Psyclone in the ultimate competition between ugly skinny nerds who dance in front of arcade games. This webcomic will undoubtedly appeal to all you people who love shitty art, watching people dance in front of machines, and the trials and tribulations of a bunch of nerds who think they're trendy Japanese retards who are pretending they're trendy American retards. I'm thinking that's, at the most, like one person, possibly less.