Tribute's Luigi Fan-Art Gallery, submitted by Accidental Google Result. We've seen just how crazy Mario is, but what about his brother Luigi? Is he sane or is he crazy? Was he sane and driven crazy by Mario? So many questions. This site attempts to answer none of those questions, but does feature lots of terrible drawings of Luigi, the less super of the Super Mario Brothers. Normally I think of Luigi as a tall, gaunt, and awkward looking man who probably only has a painfully messy and inappropriate relationship with a young, drug-addicted mushroom girl to look forward to, but on this site he's an Italian hunk, who is concurrently hot. Although he takes many forms, as different artists see the world in different ways. This artist probably doesn't see at all, but that didn't stop him. 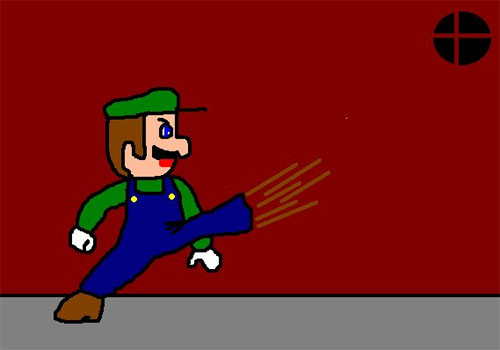 So what have we learned today? Mario is a pervert and Luigi is missing a foot, but seems to have some sort of leaf blowing apparatus hooked up in its place. WHAT A FAMILY.