Tuesday, Aug 12, 2003 by Rich "Lowtax" Kyanka (@TwitterHasBannedAllMyAccountsEver)
Know of an awful site? Send it to us and become a hero!

..:: Dirty Thug Recordz ::.., submitted by SeANMcBAY. Everybody knows how much I love the Insane Clown Posse and their fans. If you don't know, then I'll estimate this amount for you right here: a whole hell of a lot! If I had to choose between hanging out with ICP fans and getting shot in the face with a staple gun until my eyeballs are full of so much metal that they could be used as bizarre paperweights, I'd probably choose the ICP fan option after a mere two weeks or so of deliberation. "Dirty Thug Recordz" is not only a record label for dirty thugs, but it's also a record label that uses a "z" instead of the traditionally more accepted "s." That's how you can tell if somebody is "from the streets"; you ask them to spell out the phrase "from the streets" to you and if they spell it as "from the streetz" then you know they're hardcore. If they spell it "from tha ztreetz" then that's like six times as hardcore. If they admit they never learned how to read or write, then they're just the pinnacle of coolness and you should take a bullet for them at the earliest chance.

As you can probably guess, "Dirty Thug Recordz" is run by a chubby white kid who wears makeup. Now I'd really hate to make any sweeping generalizations here, but that accurately describes every ICP fan in existence. In order to be DOWN WIT DA CLOWNZ, you must first prove you are a pasty, doughy, chubby white kid from the suburbs who has access to your mother's stage performance makeup and a younger brother who will use a paint roller to smear your face with the shit. Then you have to write like this: 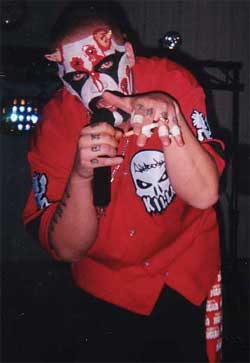 WHATS UP SLUGZ THIS IZ MAD MAN MOLO WIT A PEACE OF NEWZ FOR DAT ASS. CHECK IT KILLA-C HAS JUST INFORMED ME THAT THE RE-RELEASE 4 RIVAZ OV BLOOD HAS JUST BEEN FINISHED AND SENT OFF FOR THE FINAL MASTERING STAGES WHICH WILL BE COMPLETED EARLY NEXT WEEK. LISTEN UP THIS IS FOR YOU WHO GOT THE RIVAZ OV BLOOD PRE RELEASE SAMPLER REMEMBER "KILLLAZ REALM" WASNT ON DAT WELL IF YOU WANT THAT ON THIS SHIT.. OR IF YOU DIDNT GET THAT AND WANT TO HERE IT...FUCKIN VOTE....SEND EMAILS TO "vote@dirtythug.com" THEY MUST BE RECIEVED BY MONDAY AUG 11TH AT 5:00 PM SO FUCKIN VOTE... OK THEN... ALSO THE RE-RELEASE DATE FOR RIVAZ OV BLOOD WILL BE ANNOUNCED SOME TIME NEXT WEEK SO KEEP THEM DIRTY EYEZ UP ON THIS SHIT!!!!!!!UNTIL NEXT TIME MUTHA FACKOOS.....KEEP THE MURD UP! MCL MOLO

Oh no! "RIVAZ OV BLOOD"! That album sounds so incredibly hardcore that I don't think I can possibly fathom its potential impact on my worthless, insignificant life! Maybe "Killa-C" raps about how life is unfair because his mom wouldn't lend him the Station Wagon when he really wanted to go see the sequel to "The Matrix!" Or maybe there's a rap about "representin'" from "central Wisconsin!" Either way, I'm absolutely blown away by the sheer amount of tru' thuggin' going on here, and the only thing possibly more uplifting than this site is the number of people who will email me to complain about making fun of the dynamic white trash ICP duo. TRU JUGGALOS REPRESENT, SEND DAT WEBMASTER DA NASTY AZZ EMAILZ WERD UP TO DA TRAILER PARK, MOMMA NEEDS SOME SMOKES!

PS: In a highly non-ironic twist, this dumbass has performed in Appleton, Wisconsin. Yes, Appleton.

PPPS: Make sure to listen to "Death Vision," a song which has the most beautiful ten-second opening in the history of recorded information.