Unfortunately Zack couldn't write today's update because he ate several pounds of raw, recalled beef. He's in the hospital now suffering from an agitated gut and emotional trauma that can only be inaccurately described as "a vast, sweeping conspiracy." While he's away getting his stomach pumped clean of the contaminated meat, I will be covering for him. Feel free to e-mail Zack with your well wishes or wishes of wellness. You can also ask him to do us all a favor and stay sick, but only if you're a jerk. But hey, only jerks read this site so fire away, jerkstove.

As an avid moviegoer, I find myself going to and watching movies avidly. Movies represent the perfect escape from my topsy-turvy world of sitting at my desk and adjusting the various mugs containing pens and pencils I own. In my world, anything can happen. And let me tell you, sometimes things do happen. Like once I went and reached for a pencil, but I accidentally pulled out a pen instead! Another time I even knocked one of my mugs over and spent several minutes gathering the fallen pencils and pens and returning them safely to home base. As you might have gathered, my life is a thrill-crammed hayride so intense that it would instantly kill anyone over the age of 115 as well as children who suffer from severely hilarious heart conditions. The point at one point I was trying to make is that movies are the perfect vehicle to transport me out of the real world and into the imaginary world of simulated action and adventure that is film. I can forget about all the headaches and suspend the crushing pain of my life for a couple hours. Provided the movie is good, of course.

Hollywood is a town that aims to disappoint, though. Like the feisty virago she is, Hollywood scolds us with trash that doesn't enlighten but rather insults and belittles. She's a broken kettle leaking hot logic all over our laps. Instead of letting talented people make good movies, idiots like Joel Schumacher are given millions of dollars to essentially go out and commit rape. Case in point: "Batman and Robin." After Adam West fought so gallantly to make Batman the manliest superhero out there, Tim Burton and Joel Schumacher made the character so incredibly gay that the mere sight of him would cause any homosexual to implode. I realize I'm still bitching about that ancient movie, but times haven't changed. I recently watched "K-19: The Widow Maker" and it was nothing but a bunch of Americans with bad British accents pretending to be Russians while carelessly wrecking their submarine and then doing an awful job of fixing it. Where's the fun in that? That's so completely unrealistic! Then we have the "Lord of the Rings" movies. Talk about predictable; you can find out how it ends by reading a book written decades ago. It's a bunch of hobbits crusading to throw a ring into the fiery crack of Mount Doom. Wow, that's pretty deep! If they wanted to be original, the movie would be about a group of astronauts traveling through dangerous canyons so they can cast a radioactive space rock into the dry, arid depths of Candice Bergen's vagina. Now that's exciting!

I complain a lot about things I don't understand, like women and restraining orders. Rarely do I ever do anything to empower myself or make a difference. Well today I do things differently! I'm going to empower myself and make a difference. I'm going to change Hollywood for the better by sharing some of my wonderful ideas for movies with you, the viewing public. If you're a rich Hollywood agent eager to throw money at someone, feel free to throw your Hollywood money at me. I will use your money to buy as many guns as I can so that I alone will survive the coming tribulation. The rest of you may die happy (or die when I shoot you during the coming tribulation!) upon reading about these future blockbusters:

Killcopter will shred you to pieces!

Tagline: "This summer, danger turns upside down and advances on you rapidly!"

Premise: Killcopter is a vicious, sentient helicopter bent on turning himself upside-down and chasing people through common and unexpected locations with a kind of bloodlust rarely seen in helicopters. In his summer debut, Killcopter runs afoul of a children's clinic, shredding children to pieces and then distributing said pieces all over the walls. Who can stop Killcopter? Only Killcopter can stop Killcopter!

Cast: Obviously there aren't many sentient, homicidal helicopters bent on turning themselves upside-down and chasing civilians through common and unexpected locations, so this movie will just have to use a human-controlled helicopter for the lead role. I freaking hate children, so all the kids in the children's clinic will be played by older, bald actors. Patrick Stewart, Bruce Willis, and a hairless Gallagher will all star as sick children/Killcopter victims 1-3. Also, Jeff Goldblum will play the part of an idiot who gets shot. He won't actually appear in the movie because I'll intentionally mess up the scene where he's supposed to get shot and since there is only one Jeff Goldblum – a dead Jeff Goldblum – we'll have no choice but to write him out of the movie.

Audience Appeal: With the combined charm of both "Maximum Overdrive" and "Knight Rider" behind it, this movie simply cannot fail. People love seeing movies about satanic, demon-possessed helicopters bent on turning themselves upside-down and chasing people through random locations, so they will surely pay top, bottom, and middle dollar to see Killcopter. You can safely bet on your child's future that Killcopter will make a killing at the box office. Plus the amount of gore featured in this movie will be enough to make Charles Manson jealous, and when he gets jealous his forehead wrinkles up and it looks really cute because his swastika tattoo folds in on itself.

Premise: I'm not all about horribly violent or action packed movies. Sometimes I'm about touching family comedies, too. That's why I have come up with the concept of Tree Dad, a movie about the Woods family and their tree patriarch. While the first forty minutes aren't so family-oriented (it's a gratuitous sex scene involving a tree and lots of sticky sap), the rest of the movie is. This movie will feature tender moments involving the kids interacting with their tree father, who they climb on and swing from like a tree. Because of the uniqueness of the Woods family, kids will come to understand diversity much better. Also, they will come to look upon trees as providers and father figures.

Cast: An actual tree will play the part of the father, Woodrow Woods. Because trees don't move or talk, this won't be a problem at all. As far as the rest of the cast, Scott Baio will play every role. To help differentiate the characters, he will wear an assortment of tribal death masks.

Audience Appeal: Virtually limitless! Kids, adults, and sexual predators alike will fall in love with Tree Dad, the movie that will warm your bark! The touching end, when Tree Dad is chopped down, will also teach children about death and how the cold hands of Thanatos are always just inches away. Like most family movies, video and DVD sales will be great. I will be making millions once more!

Danger is always hard to swallow.

Tagline: "The biggest storm of all cannot be seen by the naked eye."

Premise: The world's tiniest tornado is rampaging through the stomach of a dying man. It's up to a ragtag team of elite miniature tornado chasers to go inside this dying man and try to stop the tornado dead in its tracks. Stopping a tornado is one thing, but when that tornado is wired to explode you're playing a whole other tiny ballgame of danger.

Cast: Because moviemaking should be a challenge, I will only allow actors and actresses named "Martin" to act in this movie. Martin can either be their first name or their last name. The only other restriction is that if their first name is Steve or their last name is Short, they can't be in it. In all likelihood, this will be a buddy picture starring Martin Lawrence and Martin Sheen. The part of the tiny tornado will be played by Ricky Martin as Dr. Martin Luther King. The whole movie will actually be a metaphor for race relations, too. So hey, now it's a timeless tale!

Audience Appeal: Tornados are scary business and people like to be scared. But take the concept of tornados, shrink them down and put them inside the stomach of a dying man and you've got something like quadruple jeopardy. People love hearing about the exploits of tornado chasers, what with their tornado chasing and all, so they will be crotchdamn amazed to see them chase tornados while inside some dying guy's intestines. Let me tell you, that might seem like a small area, but you're looking at one long chase. This film will make hundreds of millions of dollars, all of which I plan to use to kill you.

I don't think I need to remind any of you that these movies are my exclusive property, so if you steal them you'll be going to Hell. I'm more than eager to accept your millions of dollars, so please go and see my movies when they come to a theater near you! THEY WILL BE COMING!

"Hey kids and lovers, ScottyD here. Well, time flies by, doesn't it? In between arguing with Mexicans and getting berated by Zack, I somehow found the time to put together this little thing we like to call 'The Goldmine!' This week's topic is about the man himself, Captain Morgan! 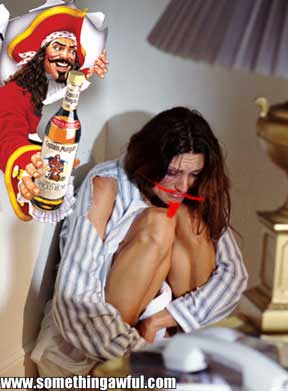 PS - I met Steve Buschemi yesterday. No, it doesn't have anything to do with The Goldmine. But I thought it was pretty goddamn cool.