Zeke Sayer - We're taking the music back..., submitted by MagiCSprinkler. Remember the band you were in back in your Freshman year of high school? Remember how you thought you were headed straight to the top? Remember how badly you actually sucked? Remember how you made a website full of flagrant typos that demonstrated a complete lack of knowledge of the music world or any sort of grip on reality? Oh wait, that last part didn't happen, because you're not Zeke Sayer. 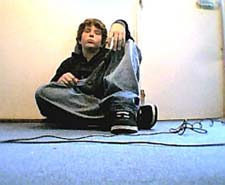 Welcome to the new Zeke Sayer.com. As most of you know, Zeke is a 15 yearold rock recording musician that has been into music for more than 8 years now and owns and operates his own home recording studio. Zeke is into Lots of grenes of music, but plays rock/metal mostly. He was the former Lead Guitarest in a local metal band, Dead Flame and preformed live many times with his dad. Zeke is the youngest of 7 kids and lives in a small town in north Georgia.

Now I'm not the kind of person who refuses to give credit where credit is due simply because it would be due to the person who's crappy website I'm trashing. Zeke plays all the instruments and does the vocals on the three tracks available on his site, and that's impressive. Plus he has a home recording studio, and that's pretty cool, too. What this means for him is that he is able to sound just like every other worthless garage band full of fifteen year olds but without the help of other people.

Zeke's currently available songs include an instrumental jam that shows limited signs of potential, and two tracks that should never be unleashed upon a public that has done nothing to deserve such punishment. The latest is a cover of Marilyn Manson's "Beautiful People." Zeke likes to think that he can sing metal. It's cute. He also likes to think that the original artist is "Marilin Mansion." The last song is a cover of "Get Free" by the Vines. I heartily recommend listening to this song directly before going to the dentist. The drill will sound so sweet in comparison.

The kid's only fifteen, so I really don't want to be too harsh on him for his shitty music. It's much easier to be harsh on him for his godawful spelling and grammar. If taking the music back includes giving up proper English skills, then I believe I'll leave music squarely in the hands of whoever the hell has it now. And for that matter, how exactly does one take the music back by doing two covers and a one minute jam with oneself? What can I say, I just don't like people anymore.