SIGA, submitted by the Freemasons.First Bryan Adams, then Celine Dion, and now this. Canada has always been known for exporting crap (with the exception of beer, hockey, and Kids in the Hall), and this site is just another thing those wacky moose fuckers are pushing on us. After 9-11, nutballs everywhere rejoiced, creaming their panties over new theories of a New World Order controlled by the Masons and spearheaded by the manichale and crafty George "Adolf" Bush. SIGA (Soliders in God's Army) was created after 9-11, to unite Canadian Christians together to fight the grand deception of the "terror attacks", and the "war on terror" led by the Masonic American governmnet, hellbent on ruling the whole planet with an iron fist. They are also koo koo for Cocoa Puffs. What scares me is that this organization is rather large in Canada thanks to the anti-war movement, and they are able to afford a large amount of advertising space around Canadian cities. While I'm no big fan of the current administraion, the thought that the President hired the terrorists to blow up the World Trade Center for him to seize total power, and for his freemason brethren to create a New World Order is pretty farfetched. This is why religion should be separated from politics. 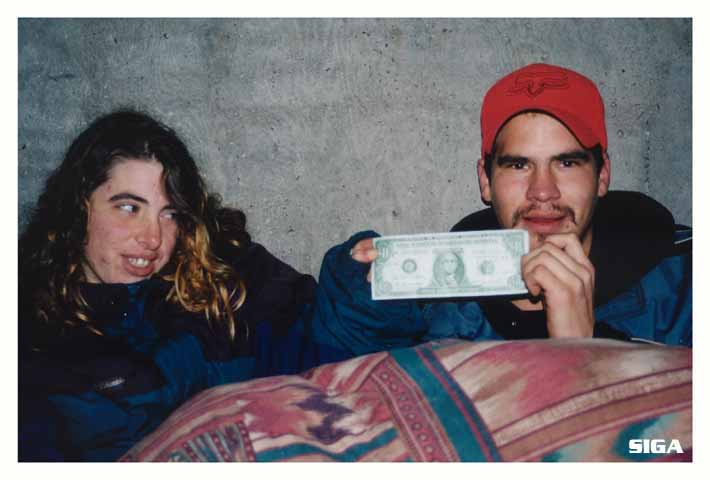 Some Canadian hobos holding up the "Deception Dollar". You can't fool all the hobos all of the time.

These guys are giving way too much credit to George Bush, Jr. I mean he has trouble enough with consuming his snack food, do you really think he is capable of creating this huge conspiracy to fool the nation that we are under attack and need to take over the world? We have enough people that hate us as it is, we don't need to fake it. If you have a theory that you would like SIGA to hear, you can contact them at sigacanada@yahoo.com. Also, can you please tell them to get a new picture of Jesus on their home page? The one they have right now really sucks, and kind of resembles Al Borland from "Home Improvement", but with longer hair.