The Website of the Messiah, submitted by Synacksyn. The good news: Jesus Christ, our Lord and Savior, has returned to Earth, thus heralding the reckoning for the wicked and ten thousand years of supreme peace and joy for all who believe in his diving light. The bad news: before he gets to all that, he's going to be a real pain in the ass. 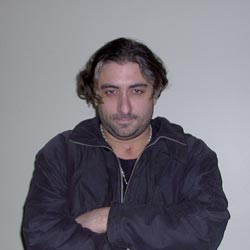 Louis Stephen Carrozzi IX is the Messiah. Unfortunately, that isn't quite enough to keep him in the life of luxury to which the Son of God is accustomed. He keeps having delightfully comic misadventures butting heads with the Doubting Thomases of the world, whom he calls "sheeple." If the use of the term "sheeple" itself isn't enough to convince you that this guy is an asshole, just spend some time browsing his site. It'll become clear pretty quickly. For instance, here's an excerpt from his latest news entry:

Well, appearently THE SHEEPLE in my friend's apartment building, who are bunch of scared pussies who don't give a shit about anyone except themselves and can't mind their own fucking business decided that I "made them uncomfortable" JUST BY LIVING HERE - shit I didn't even DO anything wrong! Just living was enough to OFFEND THEM, oh, and I talked too loud on the phone to my best friend who I haven't talked to in MONTHS, and that was it.

The SHEEPLE, sick, vile, ignornant, twisted fucking sinful BASTARDS of human beings that they are decided to gang up on my FRIEND because she was being NICE and helping out a person (me) who was less fortunate than her, and now they are threating to get HER evicted because of ME.

FUCK YOU PEOPLE, and you KNOW who YOU ARE!

I am THE GOD DAMN KING of this PLANET and I am trying to bust my ass to save your punk fucking asses from a NUCLEAR WAR and this is the thanks and respect I get for doing my best to try and SAVE THE HUMAN RACE?

You know what I want for Christmas this year?

I WANT AN 8.1 EARTHQUAKE TO FLATTEN FUCKING LOS ANGELES!

Oh, shit, you people are on my BAD SIDE now, and with seismic scientists saying LA is overdue for an EARTHQUAKE and the MESSIAH being back in town - well YOU do the math.

Payback is a BITCH and VENGEANCE WILL BE MINE!

YOU DO NOT FUCK WITH THE KING!

THE KING WILL KICK YOUR MOTHERFUCKING ASS!

PS: If anyone in LA wants to help THE LORD out with a couch to crash on until I can get my own place, please feel free to e-mail me here. I am potty trained, housebroken, and actually a super nice guy as long as you aren't a JUDGMENTAL PRICK to me. You scratch my back, I'll scratch yours, and yes, for now I DO HAVE A DAY JOB.

Sorry that excerpt was so long. I was going to trim it down some, but well, it's freaking hilarious. Hell, I could base an entire sitcom around the phrase "If anyone in LA wants to help THE LORD out with a couch to crash on until I can get my own place." It wouldn't even be hard. In fact, here's an example:

SCENE: Larry's apartment - kitchen. THE MESSIAH, LOUIS STEPHEN CARROZZI IX, sits at the kitchen table with his head in his hands. His right hand is bandaged. The kitchen is in ruins, and milk is all over the floor. LARRY, a single guy in his late twenties, enters after a day at work at a magazine or something equally hip, yet rife with comedic possibilities.

Larry: "Hey Louis. How was your day? Wait, what in the name of God happened here?"
The Messiah: (Sullen) "Don't take my dad's name in vain, asscock. And I've told you a million goddamn times to call me 'The Messiah.'"
Larry: "Whatever, Louis. Now what the hell happened to my kitchen."
The Messiah: (Looking up at him) "First of all, it's our kitchen. I pay a tenth of the rent. Second, I got fired from my job today. Oh, that reminds me, I won't be able to pay my tenth of the rent this month."
Larry: "You lost another job? Jesus, that's the second one this week, Louis."
The Messiah: "Don't you think I know that, you pussyfart? And you don't need to be redundant."
Larry: "Redundant? Oh, I get it; - Jesus, Louis - forget it. That doesn't explain what happened to the kitchen."
The Messiah: "Well, after I got fired, I figured I might as well get plastered, so I came back here to turn some water into wine. Only somebody forgot to refill the Brita again! I'm not about to use the tap water in this city for my wine, Larry - not with all the fucking garbage the stupid sheeple government puts in it! You know that. So I tried to turn the milk into wine, instead, but for some reason the stupid shitraping fuck milk wouldn't change! So I smashed the bottle on the goddamn floor. I was still pissed, so I punched the microwave. The glass fucking cut my hand, though, and that just pissed me off even more, so I tore the door off the freezer and used it to beat the piss out of the oven. But I dropped it on my foot - it probably broke my little toe by the way, thanks for asking. Then I got mad. All I remember after that is swinging the blender around by its power cord like a fucking housecat."
Larry: "My mother gave me that blender!"
The Messiah: "Well that's what happens when you buy such fucking shitty nonalcoholic milk, tithead! I'm fucking fed up with you sheeple and your transformation-resistant foodstuffs. I'm the motherfucking Messiah, here! I fucking died to save your sorry-ass soul, and all I want is a little milk that fucking turns to fucking wine when I fucking want it to! Is that so much to ask?"
Larry: "What?"
The Messiah: "Don't give me that noise, you fucking no-brained sherson!"
Larry: "What the hell is a 'sherson?'"
The Messiah: "It's the singular of 'sheeple,' duh! God! You're so fucking retarded!"
Larry: "I see very little chance of this show getting past the censors."
The Messiah: "Suck my nuts."

See that? Didn't even break a sweat. Besides his charming personality, Louis has a great fondness for flaunting his divine right to screw up the laws of spelling, grammar, and punctuation. He also loves to capitalize words or put them in quotes for no real reason, as in this sentence from his legal disclaimer:

THIS SITE IS RATED 'R' FOR 'RESTRICTED!' DUE TO 'FOUL LANGUAGE' AND SOME 'NUDUTY'.

Yep, the Messiah is completely aware of his potty mouth, but he insists that it's okay. You see, lots of people swear, so to communicate to the masses, he must swear as well, because people who swear only understand swears... or something. I don't know. This guy gets confusing sometimes. For instance:

THERE IS A BIG DIFFERENCE BETWEEN USING WORDS LIKE SHIT AND THE "F" WORD AND ACTUALLY CURSING SOMEONE. CURSING IS AN ANTI PRAYER AND IS FAR WORSE THAN USING A SO-CALLED SWEAR WORD. THE "F" WORD IN PARTICULAR LITERALLY MEANS "TO STRIKE" WHICH IS WHAT WE ARE GOING TO DO:

USE THE WORD TO STRIKE DOWN EVIL!

TAKE EVIL AND SPELL IT BACKWARDS AND YOU GET THE WORD LIVE!

Okay, well, no, "fuck" does not mean "to strike," but I guess that's okay. I'm not really sure what spelling "evil" backwards has to do with anything, either. I'm sure that's just because I'm one of the unenlightened sheeple of the world. The Messiah also absolutely loves huge text. He probably consults God before designing any aspect of his website.

The Messiah: "Oh Lord, my heavenly father, how should I design the links for my webpage so as best to guide the shiteating sheeple into salvation?"
God: "I DEMAND HUGE TEXT! MANY COLORS! AN UNREADABLE FONT!"
The Messiah: "So shall it be done."
God: "FUCKSHIT!"
The Messiah: "Fucking A right!"

Of course, before you can even get to his huge, nearly unreadable site navigation which looks like photoshop's gradient tool suffered a bout of horrible projectile vomiting, you have to go through not one, not two, but three entry pages, not even including the legal disclaimer page I mentioned earlier. The journey is well worth it, though. 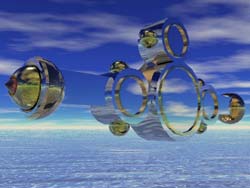 Inside, you can find all the insane ramblings you'd expect from a man who gets both confused and upset when George W. Bush doesn't return his emails. For instance, the Messiah encourages his followers to die, because dying is actually just the cheapest form of hyperspace travel. And who wouldn't want to travel through hyperspace? Nobody, that's who! You can also find the Messiah's screenplays, including one based on the wildly popular and extremely biblical "MechWarrior" video game series. There's also a page dedicated to his obsession with Madonna. See, she's named after the Virgin Mary, so she must be the Messiah's soulmate! Amazingly, Madonna has yet to reciprocate his affections. 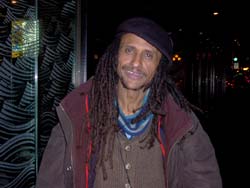 Yeah, this guy's truly one of God's chosen.

Perhaps the most inspiring section of the Messiah's website, of which there are many, is the Meek Hall of Fame, which offers pictures and praises of the Messiah's chosen friends. After all, "the meek shall inherit," right? For the record, "meek," in this case should be taken to mean "a Hot or Not for homeless people and Hooters girls." I'm serious about that. I'm serious about all of this. There's something very, very wrong with that. The Meek Hall of Fame provides documentation of some of the Messiah's most noteworthy interactions with us mere mortals. Isn't it amazing how that sounds so much better than "pictures and moronic captions about some fat guy going to a restaurant?" But don't let the fancy wording fool you - this is basically a LiveJournal with ridiculously huge images.

All in all, this site can provide hours of entertainment. Louis Stephen Carrozzi IX is completely insane. Of course, that becomes perfectly clear the moment he tries to claim that Eminem, Dr. Dre, and 50 Cent are ranking generals in the Army of the Lord. It's all the fun you can possibly have reading the words of a man who spends most of his time writing threatening letters to celebrities and getting kicked out of apartments. I can't believe I'm saying this, but this is a man who could really benefit from discovering Scientology.