Dark Skies; A Glimpse Inside the Mind of Charles Swan III

We're dealing with issues this week. Fatherhood issues are up first with Sean "Keanu Grieves" Hanson hashing it out with Dark Skies. Then we have self-importance issues, as Joseph "Jay Dub" Wade finds himself face to face with Charlie Sheen in A Glimpse Inside the Mind of Charles Swan III/.

EXPECTATIONS: This pretty much sums it up.

REALITY: I love you, Horror Dad -- you, the unwavering rationalist, the scientific thinker who stares in disbelief at the goofy shit in which your wife and kid(s) suddenly believe. As a scientifically minded rational filmgoer, I frequently do the same, weighing supernatural events against my suspension of disbelief. I have the luxury of knowing it's only a movie that generated scares by hewing to its own logic even while it incorporates ghosts or vampires or werewolves or invading aliens or any number of things I don't actually believe in, but you -- trapped on the other side of that screen -- don't have that luxury. You're eventually swayed, undone or consumed by the irrational horror you resisted, but we don't feel sorry for you because you've been a bit of an asshole the whole time. 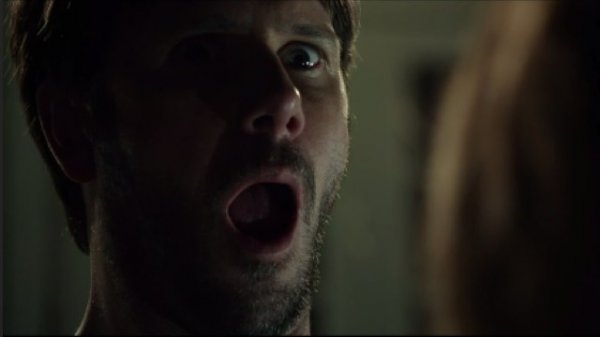 
Indeed, horror films frequently associate rationality with assholism, and Dark Skies is no exception. The Horror Dad this time around is Daniel Barrett (Josh Hamilton) while Lacy Barrett (Keri Russell) is the requisite Horror Mom, so quick to believe in anything supernatural because women have devoted their whole lives to studying such irrational phenomena as babies and blood emerging from their vaginas. That's the implication, anyway. So when an unknown intruder builds an elaborate statue from household goods in their kitchen one night, trips all eight of the Barretts' intruder alarms simultaneously the next and inspires three distinct migrating flocks of birds to commit suicide against the Barretts' windowpanes the following sunny afternoon, Lacy hops on her iMac, opens Safari and -- through the magic of Search, the Internet's premiere search engine -- decides she now believes in some goofy shit about aliens. Horror Dad is incredulous: "The fuck you say?"

Horror Mom flashes pleading eyes. She knows the horror narrative can't progress until Horror Dad comes around to believing the same goofy shit, but he won't relent and hop on the path to belief until he installs a few cameras and two or more bad things happen to the crazy people who share his suburban home. Suddenly he's searching for the truth beyond science, because science doesn't fare so well in this genre.

The point is, Insidious (and, to a lesser extent, Sinister) did some interesting things with Horror Dad. And for all its faults, Dark Skies definitely has an intriguing, effective take on the Horror Dad trope. Even before the supernatural presence visits Whitebread, USA, Daniel gets sweaty and nervous during a job interview, calls his son's friend "Ratface" and goes into fits of rage. Twice in Dark Skies, the filmmakers use The Shining as a point of visual reference, and there's a touch of Jack Torrance in Daniel Barrett, which strengthens later scenes in which he's accused of abusing their children, Sam (Kadan Rockett) and Jesse (Dakota Goyo). You could almost see Dark Skies as a quasi-sequel to The Shining: Danny Torrance, all grown up, has changed his last name to disconnect from his past, moved to Whitebread and started a family, but he's unable to break the cycle of abuse, and a different supernatural threat symbolizes family dysfunction this time around. 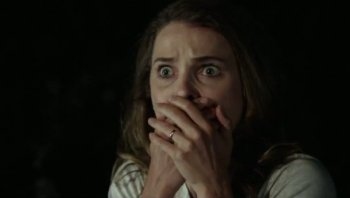 You, too, will be amazed at just how dark these skies can get.That's not to say Dark Skies is qualitatively similar to The Shining. Cliches abound, and familial tension is crystallized by yet another scene in which the wife drags her laptop into bed, the locus of marital relations, and rejects her husband's sexual advances because she needs "to get some work done." The dark implication of this, of course, is that a woman establishes a career at the expense of her husband, but when malevolence intrudes on their domestic tranquility, he's the last one to remain relatively calm and rational while she freaks the fuck out and weeps for her children. Unless filmmakers abandon such antiquated ideas, you and I are gonna be enjoying the Horror Dad/Horror Mom dynamic for many years and Paranormal Activity sequels to come.

Luckily, Dark Skies has some admirable qualities. Its unusual soundscape consists of long periods of silence punctuated by abrasive loud noises and a skittering, amelodic score. The filmmakers balance this against warm, sun-bleached cinematography and actors who are capable of selling the Barretts' domestic problems during their many explosive arguments, creating a memorable atmosphere of suburban horror that sustains Dark Skies even as it casually apes elements from its predecessors. A hallucination scene late in the film that borrows its framing from The Shining, the wallpaper from The Pact and the tableau theatricality from Insidious would fall apart if the filmmakers weren't so damn good at integrating acoustics and aesthetics.

Director Scott Stewart has shown such remarkable improvement since the unfathomably awful Legion and Priest, I'm about to write a sentence I never imagined I'd find myself writing: I'm excited for Scott Stewart's next film. Watching Dark Skies is akin to watching a monkey suddenly demonstrate the ability to speak. He remains incapable of saying anything especially worthwhile, but the progress is so damn impressive you're excited for the day when he stops flinging his shit altogether and dons a tuxedo for your amusement.

MINORITY REPORT: I look forward to Mr. Hanson's upcoming book I Love You, Horror Dad, featuring such chapters as "I Brought This On Myself: Why Poltergeist Is All My Fault" and "The House is My Child: The Apparition and the Plight of Millennial Homeowners". Coming Fall 2013. - Joseph "Jay Dub" Wade