Thursday, May 05, 2005 by Reid "Frolixo" Paskiewicz
Know of an awful site? Send it to us and become a hero!

Psychic Paintings, submitted by Polly the dog. Leo Jean is the premiere Internet wacko around these parts. His sites have been featured more than a few times as an Awful Link, and I have a feeling many more times as long as he keeps pumping out this comedy cold. Psychic Paintings is one of these sites that you hope and pray is a fake but unfortunately its not. Here is the intro for the site:

The paintings that are presented on this website are part of my "Ancient Alien Art Collection©." These original works represent some of the many dimensional beings that I've encountered during my lifetime. These psychic paintings combine my dimensional knowledge with the talent of a psychic artist that I've trained.

Ooooook then. Be prepared to bust out your checkbooks because this site is home of the "3 Million Light Pegasus Painting"! Well at least he's modest. Oh look, here is another one of his masterpieces going for a couple million. 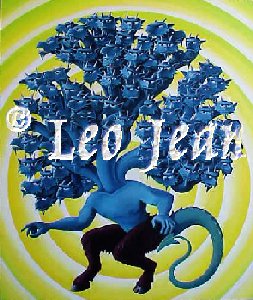 "Seventy-five years ago I became aware that my purpose in life was greater than anyone else's on this planet. When I turned three years old, my spirit told me that I would begin my journey by learning the Natural Law of the Universe: Self-love, serenity, exuberance, patience, concentration, stamina, perception, intuition, transcendence and self-mastery.

The greatest spiritual battle ever was to take place in my lifetime, and I would be the most capable person alive to take on the challenge against the negative forces of the universe. This 81-headed overseer was specially created to retard my progress. All my life I've seen this blue entity on my back, along with its seventy-one replacements, whose sole purpose was to ensure my failure. In order to pick up this powerful entity, I knew that I had to increase my strength daily. I progressively doubled my Light power until the first week of February 2000, when my earliest prophecy of winning a great spiritual battle became a reality."

Well its good to have a hobby I guess. This guy is so out there that he's pretty cool, but the scary part is that I bet this guy has a ton of followers. It seems that if you are insane enough that you put tons of effort into something, you'll always get some people to believe your cause because there is no way somebody would put this much effort into a lie, like Ron Hubbard and Bill O'Reilly. I'm totally gonna put the Light Pegasus painting in my basement with the black light. It's gonna be killer.