Blackwater USA Pro Shop, submitted by America. Blackwater USA is a corporation devoted to military and paramilitary training and it is the leading provider of armed "civilian contractors" for the United States in Iraq. Blackwater has provided security for VIPs, has gone on combat missions normally executed by the US armed forces, and the death of four of its operatives and the abuse of their corpses by an angry mob prompted the United States Marine Corps to storm Fallujah. They operate outside US military law, have participated in interrogation of detainees, and have probably been responsible for an unknown number of civilian deaths in Iraq.

Our clients include federal law enforcement agencies, the Department of Defense, Department of State, and Department of Transportation, local and state entities from around the country, multi-national corporations, and friendly nations from all over the globe.

Oh, and they also sell bears with their logo on a cute wittle t-shirt. 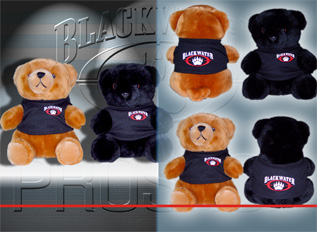 Our soft stuffed bears are about 7.5" tall and about 5.5" at the widest area. The Blackwater Bear is made from Polyester fiber and the surface is washable. Each Bear comes dressed in a removable Blackwater t-shirt complete with chest and back logos! Recommended for ages 3 and up. Available in black and brown.

South African bear drinks on the job and beats civilians with a blackjack for half the price of our former US military bears.