Umber the Unborn, submitted by EndOfTheWorld. Do "Tom Tomorrow" and "Get Your War On" make your conservative blood boil? Do you wonder where your inane political comic is? Umbert the Unborn is just the family-friendly comic strip with a vaguely nauseating political agenda for you! You see, he's a fetus, and he's alive and talking! Just like in real life. So abortion is wrong. That's the underlying point of the comic strip. The blandly inoffensive jokes in the individual strips somehow cheapen the whole travesty even more. 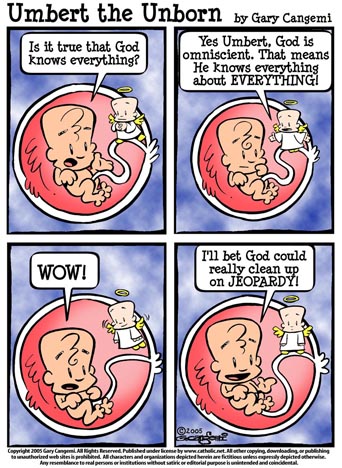 Horrible jokes, annoyingly personified lumps of hideous meat, and smarmy moralizing make me wish that the series of strips ended with Umber meeting the business end of a suction abortion.

This sort of crap is the mongoloid visualization of why stem cell research is bad. If you think wads of cells the size of the period at the end of the last sentence are really comparable to a cartoon baby who talks to angels then you probably oppose any sort of research that doesn't involve a lot of studying of the Bible and conversing with the Lord. And then because of you we end up eating little pressed-sugar crosses hoping that they will cure our scurvy.