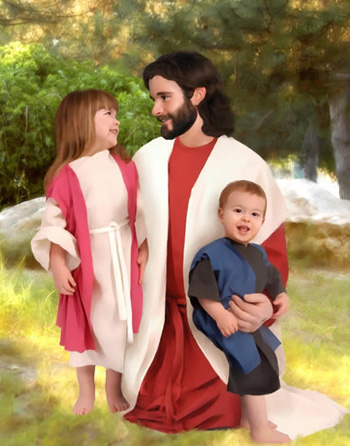 It's understandable that parents would want their children to hang out with Jesus, because he presumably makes much better company than the average dead guy. Likewise, Jesus probably likes kids more than he likes adults, because their impressionable minds are more receptive to his message, and because they're unlikely to barrage him with pointed questions about societal injustice and these tough economic times. Unfortunately, it's quite difficult to schedule time with the Savior, so people are willing to settle for virtual play dates, as illustrated by Amanda Kay.

I especially love to see the faces of the children when they first see themselves with Christ.

It's unclear whether Kay means that she loves seeing the photographed faces of the children in a new context, once she's awkwardly merged them with her Jesus backdrops, or whether she means she enjoys seeing the children's baffled expressions when they view the finished product. Regardless, Kay doesn't only add little children (up to 10 kids for $379.95; 11 or more, call for a quote!) to her portraits. Teenage girls can be depicted alone with Jesus, giving the artwork a creepily romantic "Christian Twilight" feel. Or The Messiah can be shown buddying it up with a group of teens, in an image that communicates "this old dude bought us some beer, and now we're going to show him one hell of a picnic!" You can even impress your secular, video-game-playing friends with Amanda Kay's art, as they'll surely want to know the story about the time you let your young daughters pose with Billy Mitchell for some reason. 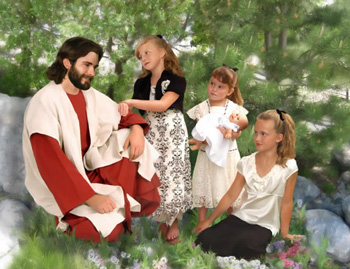 The King of Kings of Kong.