Thursday, Mar 14, 2002 by Rich "Lowtax" Kyanka (@TwitterHasBannedAllMyAccountsEver)
Know of an awful site? Send it to us and become a hero!

David Cooney.com Illustrations and Cartoons, submitted by Cartoon Site Reviewer. It's David Cooney! And illustrations! And cartoons! It's David Cooney's Illustrations and Cartoons! Ol' Davey has pages and pages of bizarre, pointless cartoons that don't really make any sense and are so far from containing a punchline that any joke in a nearby 600-foot radius will be sucked into its black hole of stupidity. His cartoons have the kind of humor targeted at 90-year old grandmothers and teenage girls who are really into Bible study. It's as if every cafeteria worker in the world had somehow joined together into one foaming mass of gelatinous goo which was given some colored pencils and paper. However, what Mr. Cooney lacks in creativity he sure as hell makes up for in quantity, as he's got roughly 500 different categories of cartoons, each of which looks nearly identical as the previous except a few of the words have been changed and some of the characters' skulls look more disproportionate than the others. 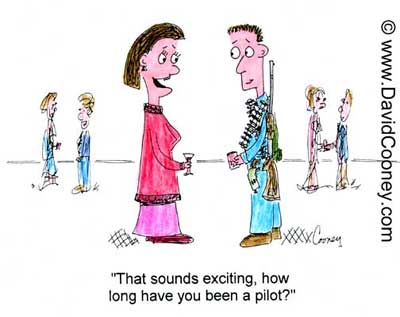 Ha ha! That's funny because he has guns! And pilots need guns now because of the terrorists! Ha ha! What a biting and satirical look at society as a whole! What I find to be the most interesting thing about this comic is not the awe-inspiring artwork or hilarious skewed outlook on life, but the fact that David Cooney couldn't spare enough time to make the vertical blobs in the background resemble anything other than a series of random scribbles and coloring. I mean, look at this: 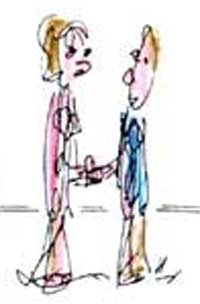 What the hell are they doing back there? It looks like Groucho Marx dressed up as a nun with a spider on his head and a cape sticking his penis into the penis of a football with a piece of ham on its side mounted on a blue folding umbrella shooting sparks. It's this little hidden meaning and inside joke that makes going through the David Cooney archives the joy it is, which is currently "a whole heck of a lot." Make sure to check out the "Computer Cartoons" which contains such gems as "Internet Chatting" and "On-Line Identity." Don't be ashamed if you don't understand the deep and philosophical meanings behind most of these works of art; only the most astute and intelligent of scholars can truly appreciate the genius of David Cooney. And that doesn't include you, dummy.