Monday, May 20, 2002 by Rich "Lowtax" Kyanka (@TwitterHasBannedAllMyAccountsEver)
Know of an awful site? Send it to us and become a hero!

Randy Crow - Democrat for President 2004, submitted by Mike. Randy Crow is a doughy, moist, bald white man who would really like your vote in the upcoming 2004 Presidential election. He makes his case for Presidency by using every imaginable font, millions of colors (some of which don't even exist yet), and a font size that is legible from other solar systems. Randy chooses to not run as a Republican, Democrat, or Independent; he is apparently campaigning for the "ABSOLUTE BAT-SHIT CRAZY CONSPIRACY WACKO NUTJOB" party, which seems to be a very popular choice on the Internet. 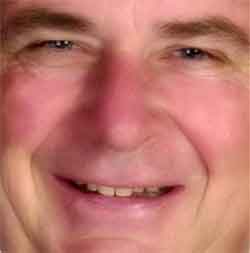 Since elimination of inheritance taxes does so much to eliminate God from our lives and communi$m, and since the fourth generation na$i'$ unconstitutional Executive Orders merging Church and State were also his first order of business after Big George's Omega Agency appointed Little George President, one can go to the bank knowing the elimination of God from our lives and the creation of a Hegelian State religion with Little George a vomit, look what the cat drug in god, is vastly important to Big George's Hegelian Omega Agency/New World Order.

Thirdly, I would like to point out the New York times types are soo greedy and dumb, they have forgotten to realize their game plan guarantees the end of the planet. The planet simply cannot survive environmentally the necessary wars to achieve their goal, theft of all the money.

This all makes sense to me, especially that one part about Gargamel making that potion to turn the Smurfs into little stone statues so he can then capture them once and for all and add them to his ceramic knickknack collection. No wait, that was an episode of "The Smurfs" I remember from the mid-1980's. Regardless, Randy Crow seems like an upstanding, intelligent, social, brilliant individual who will undoubtedly sweep the 2004 Presidential elections in a nearly unanimous landslide. Also, I'm lying.

Privileged/Confidential Information may be contained in this message. You may not copy or deliver this message to anyone. Kindly notify the web site by reply e-mail if you feel this writing or any writing posted on this web sites violates trademark infringements, may be considered a hostile posting, contain untruths, violates any norms of good behavior, or violates any laws.Failure to advise immediately will be taken by the web site as approval with the content posted on this web site. Opinions, conclusions and other information in this message that do not relate to the official business of the individual/business shall be understood as neither given nor endorsed by he/she/it.

I guess that means I'm going to jail! I blame the Zioni$t$! Please have mercy on me, I'm just a pawn of the New World Order and I'm trying to build a tinfoil helmet to keep George Bu$h from reading my mind but I'm all out of unemployment checks and I can't afford a cardboard hat brim so now I'm unfashionably horrid! Save me Randy Crow, save me from tyranny! Become President and spend all the taxpayer money to construct a gigantic metallic ant which will shoot laser beams at orbiting mind control satellites! Help us all, Randy Crow, and use your metallic ant to crush whatever the hell the "Big George's Omega Agency / New World Order evil" happens to be! We will not be able to sleep safely at night until this bloated white psycho is in the Oval Office!

PPS: I find this part of his resume to be hilarious as well:

1998 US House loose to Mike McIntyre in Dem. Primary.

Yeah, I really want to vote for the guy who can't spell "lose" correctly. I trust him with nuclear weapons just about as much as I trust Louie Anderson with protecting my refrigerator.