If you were looking for a deal in tech, it could probably be found at the industry's biggest convention, Burning Man. Held in northern Nevada's Black Rock Desert, Burning Man is a week-long festival of free expression, free love, and venture capitalists looking to get in on the ground floor of hot new tech properties. Everyone who is anyone in the industry was there, wearing a bikini and painted like a cat, probably with a homemade musical instrument and an elevator pitch about an app. We look at the hottest deals being made this year. 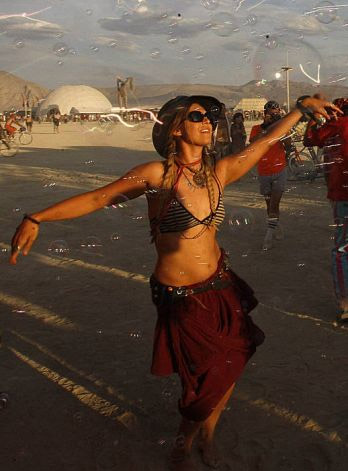 This crowd-sourced bespoke French doors site supposedly allows users to design and customize their own French doors, share with friends, and download the 3D plans to print them directly in their home. It was slated to launch in Q1 but has been beset by technical problems, chief among them that nobody can figure out how to get a 3D printer to make anything that isn't a honeycomb that takes ten hours to trim off excess plastic.

Froodr spokesman Yorst Vampeer surprised venture capitalists congregating at the body painting yurt by announcing a deal had been made. Details were slim, but Vampeer indicated that a successful closed-door demo held in the upper cog of the steampunk scrap totem inspired a "major venture capital firm" to finance a Q4 launch.