Mickey Mouse. Bugs Bunny. Bart Simpson. SpongeBob Squarepants. Once in a while, a new cartoon character comes onto the scene and defines a generation. Cool Cat is not one of those.

Cool Cat - no relation to the Looney Tunes character Cool Cat - is the the kind of generic, unappealing cartoon character you see on sad carnival rides. His only distinctive feature is a shirt with his name on it. Nevertheless, he's a multiplatform sensation: He's a book character, he's a "film" star, AND he's a costumed character who appears in parades to the bewilderment of everyone. A triple threat!

Not enough namedropping for you? Then just look at these totally legitimate endorsements from a veritable who's who of notable names:

Not to mention that Cool Cat Loves MMA Karate holds the esoteric and probably undisputed title "The Most Celebrity Endorsed Karate Book in History." Even Wrestling Superstar Virgil approves! 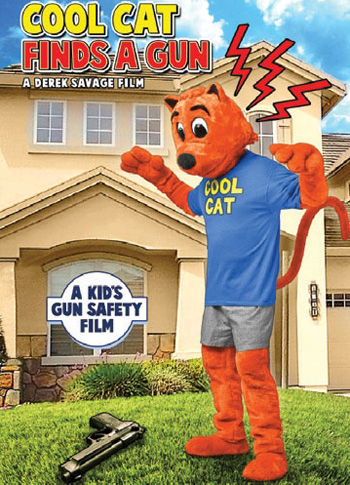 Cool Cat made his film debut in Cool Cat Finds A Gun, which you can either pay ten bucks to buy, or just watch the trailer that pretty much shows you the whole thing. Can't afford McGruff the Crime Dog for your public service announcement? Just get Cool Cat, he's ... acceptable enough! There are also three Cool Cat songs in three different audio formats (made by Grammy Award winner Magic Kramer and Tony Award winner Linda Hopkins!), all of which focus on how cool Cool Cat is.

Who's responsible for the Cool Cat media empire? That would be Derek Savage, who doesn't actually draw Cool Cat, mind you, he just takes all the credit for creating the vague notion of a cat named Cool Cat. He's also the author of other fine child-friendly books like Bible Birdie ("Bible Birdie loves God and Bible Birdie loves Children"), God's Apocalypse (in which the hero "witnesses the New World Order rise into the official government"), Sweet Revenge (a story about gang violence that "has little to no profanity with a message that White and Black people can live in friendship and overcome adversities together"), and a book about "the life and times of a male stripper," which is titled either The Dancer or Midnight Dancer (he can't seem to make up his mind).

Savage shows off several "prestige Website Awards," including the Golden Web Award he "won" three years in a row, and it's easy to see why he's so often honored for his site-design ingenuity. For example, instead of linking the titles of his videos, Savage places them on separate lines and presents them as "www.YouTube.com/CoolCatVivicaFox" or "www.YouTube.com/CoolCatPoliceChief" WHICH IS NOT HOW YOUTUBE WORKS. But at least there are actually links.

By contrast, there are no links to any of the stuff in the merchandise section (because they're just images and Savage hasn't gotten to the "image maps" part of HTML for Dummies yet). If you want sweet Cool Cat swag such as books, a book stand to hold said books, T-shirts, videos, and an Orwellian poster of Cool Cat's vacant stare with the words "COOL CAT LOVES YOU!" emblazoned on it, you'll just have to browse on over to Amazon or Barnes & Noble yourself, search for "Cool Cat" there, and hope you can find the product you want (this clever sales strategy is known in the biz as "playing hard to get").