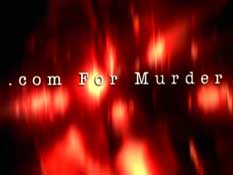 Overview: The Internet is our generation's Wild, Wild West. This untamed free range of Counter-Strike blubbering desperados and spamming outlaws has taken its fair share of victims over the past decade or so, turning many strong men into spineless, cowering simps trembling beneath an insurmountable wall of Viagra messages. Everybody knows that the Internet can be tremendously annoying, but a far fewer percentage of people are aware that the Internet can also be deadly. Yes, that is correct, this digital medium can kill you and your loved ones faster than you can say, "COMPUTER MACHINE! LOG ME OFF OF INFORMATION SUPERHIGHWAY! USE EMAIL DOT COM!" Director Nico Mastorakis, who is best known for his work on the critically acclaimed "Ninja Academy" and the blockbuster megahit "Ta Pedhia tou Dhiavolou," has perfectly illustrated this aforementioned point with his chilling, harrowing look into the deadly dot-com domain entitled ".com for Murder." This revolutionary film not only demonstrates the dangers of using chatrooms and electronic devices more complex than your average dog whistle, but it also illustrates the dangers of allowing a film studio to rent out recording equipment to Nico Mastorakis, a man who should be legally prohibited from filming anything that could possibly involve other human beings or inanimate objects.

The Case For: THE INTERNET!!!

The Case Against: THE ETERNAL SHAME AND PARADE OF EMBARASSMENT!!! 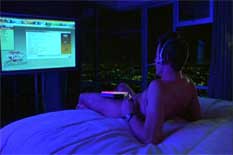 Oh you crazy Internet cyberspace hacker, will you ever learn?

".com for Murder" begins with a chilling montage of footage from Las Vegas, high tech shots featuring things such as "some old guy" and "a building." The foreboding phrase "have modem, will travel" appears on the screen and reminds us that the movie we're about to watch is, in fact, not very good in any way whatsoever. This theme of being "not very good in any way whatsoever" repeats itself frequently throughout the film and truly links this 96-minute joyride together with an amazing level of continuity previously only seen in the most expensive feminine hygiene product commercials.

Once the credit sequence ends, the movie begins by allowing us the privilege to tour some bozo's apartment in a wonderful first-person view through the eyes of a killer who picks up a steak knife and proceeds to murder the owner in their bathtub. This brutal attack is highlighted by the use of "Hollywood Stock Sound Effect #4832: Stabbing Noise" over and over again, as well as a revolutionary film technique which some NASA scientists have dubbed "pressing the camera's 'invert' button." Once the woman is successfully dead, the killer takes some time to reflect the image of his head-mounted camera off the very shiny knife blade he is holding, just in case some of the slower audience members who have spent the previous seven hours funneling warm gasoline up their asses will understand that he is holding a camera and filming his savage attack on a naked idiot who hired Gallagher to decorate her apartment.

Cut to a beautiful expensive house overlooking the city of, well, I assume Las Vegas. A radio announcer encourages dullards tuning in to "get in a chatroom with American Love Online and feel the heat!" This is because it's on the Internet and is therefore very high tech. A wheelchair-bound woman, who apparently felt too much heat on her legs and consequently cannot walk anymore, is pushed out by a highly ugly man who is obviously very rich because he is wearing a black jacket. He reflects upon the beauty of the night by pointing out how he and his crippled masterpiece can spend it watching a movie or using the Internet. She replies, "Boy I like those chatrooms. You like those chatrooms." A brief dialogue ensues where each character explains the reasons how and why they enjoy using Internet chatrooms on "American Love Online" to find hot steamy cyber-romance. This establishes the plot point that both these people are fucking idiots who should be destroyed. They exchange a brief flurry of sexual innuendos before kissing and forcing the editor to cut to the next scene because the government deemed their little makeout session "too gross for public consumption." The boyfriend, named "Ben," is played by legendary rock star Roger Daltrey, who obviously has no intent of ever becoming a legendary film star. 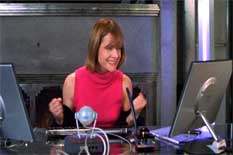 The movie truly begins to pick up when that scene ends, whisking us away from wherever the hell that location was to a completely different location which may or may not have been filmed in the same house. Some computer hacker is sitting on the end of his bed, caressing a lighted keyboard and staring into a big screen television which he is using as his monitor for some unknown reason. Also he has several jars of aborted fetuses behind his bed. Also he has little orange flashlights strapped to each of his fingers. Also his keyboard is glowing magenta. Also he is completely naked, wearing makeup, and dictating emo poetry to his computer. The mysterious evil hacker rambles off some really horrible poetry and then decides to look at "porn," which consists of exotic digitized dancers spinning around and speaking directly into a flanger set to the "wacky gay robot" preset. This makes him very happy, but since he is very evil, his happiness is demonstrated using a dutch angle, something that shitty horror filmmakers really don't use enough these days. Since porn is evil and evil hackers are evil, Nico Mastorakis does an excellent job demonstrating how this character is easily the most evil person since that one comet which wiped out all the dinosaurs and Captain Caveman. 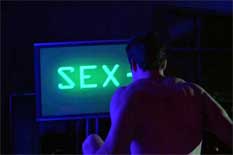 The computer screen displays one of the many, many things more enjoyable than watching this movie.

Meanwhile, back at the high-tech homestead, Miss Cantwalk (Sondra) and her old pal Ben are using the computer to do God-knows-what. Ben shows off his computer-savvy skills by speaking a series of commands into his computer which causes something somewhere to happen. He remarks to Sondra that she shouldn't call the computer "Hal" because if she does, the computer will be insulted and shut down. They probably should've just stamped the phrase "PLOT POINT" in huge red letters across the screen for the retarded Nigerian infants who might not have otherwise picked up on this subtle note.

So let's see here, there is an evil hacker, an innocent crippled woman, and a computer system which runs the entire house she's in. Can you see where this movie is heading yet? Can you imagine what exciting events will occur in the next 90 minutes or so? Can you guess how many matchbook covers were required to write down this complex script? To make the plotline even more painfully transparent, the computer (which speaks in a horribly fake deep voice) shows slowly rotating wireframe models of the entire house whenever Sondra attempts to do anything. She programs the house to start playing disco music and flash the lights on and off to impress her very old boyfriend. He laughs and then lectures her about how the computer is not a toy and should be used responsibly and she shouldn't touch that or she'll grow hair on her palms. Ben leaves for a plane trip to somewhere with some person and the computer bellows, "door open. Goodbye Ben" in the voice of Ferris Bueller's teacher. I've always wanted a master computer to say goodbye to me every fucking time I left the house, mostly because I suffered extensive brain damage after getting my head trapped in the trash compactor (I was looking for a Snickers bar).

Sondra remarks, "once the cat's away, the mice will play" and logs into Ben's American Love Online account. This is because she is a crippled slut. She enters the "romance" room and is immediately greeted by a bunch of idiots talking to each other aloud in heavily flanged voices that resemble a robot trying to pass a megaphone through its digestive system. Sondra soon gets a message from "CremBrulee" who asks him where he's been. Oh no! Ben has been cybercheating on the handicapped whore who was trying to cheat on him using his account! This is like an Internet soap opera, only exponentially more horrible! A spooky message reading "LEAVE HER ALONE" mysteriously appears on Sondra's screen, causing her to open her mouth slightly. I think she also looked slightly to the left of the camera while doing it. 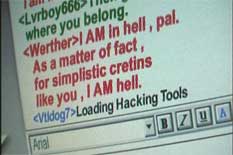 However, Sondra refuses to be intimidated by some shadowy character named "Werther" who apparently possesses the ability to completely take over her computer and make ridiculous messages appear, causing him to grow even angrier and make his chatroom text get all bloody. Please keep in mind that this is all very high tech and on the Internet. Her reply, "hey moron, go jerk off on a porn site" is followed up with, "I'll yell if I want to, zit-face," thereby serving up the most devious one-two punch of Internet insults to ever exist. Werther apparently doesn't feel like "jerking off on a porn site," so he mashes a couple keys on his magic glowing keyboard, causing a snake to appear on Sondra's screen and scare her because when she was in the tragic accident that broke her legs, she apparently also broke the portion of her brain which is responsible for logical thought and choosing non-horrible movies to star in. Werther demands she apologize and leave, she responds that it isn't his chatroom, and he says aloud, "every room is my room. I AM MASTER OF THE GAME." Once again, allow me to point out the fact that this is on the Internet and it is very high tech. Some other stupid shit happens which I won't bother explaining because I honestly don't give a fuck.