When I check out websites submitted for Awful Link of the Day, I normally find myself confronted with a number of emotions: Disgust, contempt, amusement, a deep painful ennui from which I doubt I'll ever return (day 330 and counting!). But I don't think I've ever visited a site where my strongest reaction was just being annoyed. UNTIL NOW! 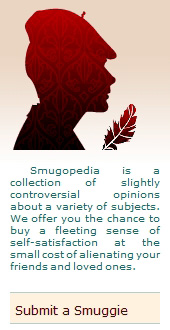 Welcome to Smugopedia, a website that lets useless pedants post charming little glimpses into their own insecurities. Run by the same people who run the Overheard sites, which are generally a funny way to distract yourself from the horrors of modern life, Smugopedia is the same idea, except instead of funny conversational snippets, people post about which Brandenburg Concerto they like best. Don't get me wrong - it's definitely possible to have opinions about this stuff. And it's perfectly fine to talk about it, too. I'm sure there have been literally dozens of incredibly interesting discussions about every subject posted on Smugopedia. But those were discussions, and that's sort of the point. They involve other people, not the Great Void of the Internet. Without context or reason, Smugopedia just becomes sad - these people are proud of their opinions, but they're unable to find anyone to share them with.

Not coincidentally, these opinions are expressed in a fucking miserable fashion. Just glancing at the first page, entries are peppered with the language of the unsure - "clearly," "obviously," "flawless," etc. It's hard not to imagine everything being said in that generic upturned-nose accent. Actually, it's probably wrong to imagine it any other way.

But like I said, I don't hate the site as much as I find myself annoyed and puzzled by it. I just don't think I understand why it exists. Not to say that this kind of thing isn't everywhere on the internet, but usually there's at least a semblance of some bullshit interactive/social element used to complement it (for instance, forums). The only possible way in which this site could be even remotely useful is if you show up at a party and start spouting off all the posts you read on Smugopedia as cool icebreakers because you've suddenly decided you want everyone to hate you. Fervently. 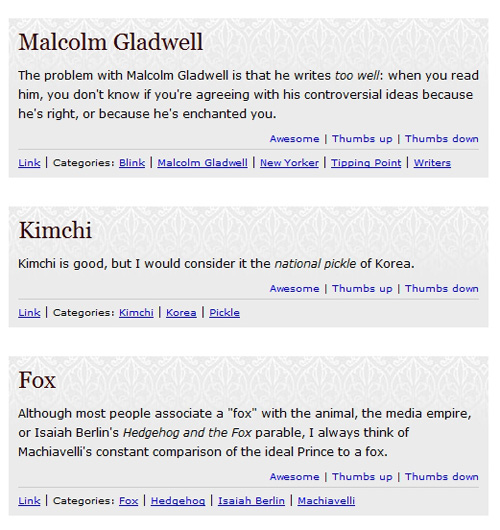