What would you do with your very own Madame Isis sword? The Vampire Huntress Web site, which will be giving away one of these prized weapons as part of a very special contest, offers a few novel suggestions: Winners could battle a serpentine beast, or they could stab the rain-streaked windshield of a moving car. 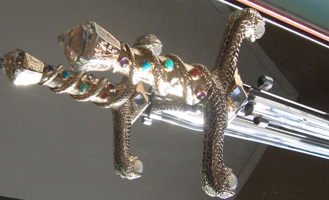 "OK, but who the fuck is Madame Isis," you might be asking. You must research L.A. Banks' Vampire Huntress Legend series, now approaching its twelfth and final installment, for the answer to this and other pressing questions in order to have any chance of winning, because the contest requires an essay on topics such as "Which major themes in the Vampire Huntress Legend series resonated with you?" The FAQ section considerately fields even tougher queries, such as "With all of these forces of darkness afoot, does humanity stand a chance?"

For a basic plot outline, or simply to laugh at the shitty special effects and overdramatized slam-poet narration, fledgling sword-brandishers can consult the series trailer. Regardless, there's not much time left, because entries must be received by January 31. I'm trusting Something Awful's readership to bring home the bejeweled blade. In the immortal words of guitar-slinging Vampire Huntress character Jacob Rider, "let's rock 'n' roll, people!"