Wednesday, Jan 07, 2009 by Andrew "Garbage Day" Miller
Know of an awful site? Send it to us and become a hero! 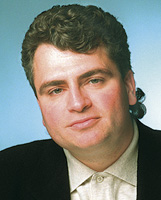 When a man constantly screams wrong-headed opinions, it's safe to assume he's either a) a deranged moron b) a raving sociopath c) a subversive provocateur, inhabiting a trollish character to prove a satirical point. With Jay Mariotti, you can probably rule out the third option. Mariotti used his Chicago Sun-Times sports-column platform to foster fire-everyone hysteria, pursue personal vendettas and make petrified pop-culture references. He also appeared on ESPN's Around The Horn, giving viewers unfortunate enough to be watching the show in HD a graphic view of his grotesque, meticulously waxed eyebrows. Mariotti abruptly quit the Sun-Times last August, taking a sabbatical during which he presumably visited locker rooms just as infrequently as when he was actually employed. Former co-worker Roger Ebert took a break from reviewing movies in order to deliver a scathing zero-star critique of Mariotti's cowardly exit. And then, blissful silence.

Sadly, Mariotti resurfaced Monday on AOL Sports, touting himself as a prescient trailblazer for moving from newsprint to the Internet, because as all computer-savvy sorts know, America Online is the wave of the future. His debut column contains a timely Fatal Attraction reference; the phrases "animal penis," "staggering number of eyeballs" and "I'm obviously jacked;" a brain-corrupting mental image ("my torrid fling with Madonna"); and a butchered misquoting of the "I'm Bill Kurtis, and I've just found the Internet" ads. Same bullshit, different venue. Any hopes of the newspaper-to-blogs shift resulting in journalistic Darwinism just suffered a wretched death.