It's time for a new Twilight movie! And who else should get the honours but the ambassador of crappy summer movies, Joseph "Jay Dub" Wade? I've heard watching Twilight films can make you sterile, so I hope he wasn't planning on breeding at any point.

Eclipse; for the confused teenage girl in all of us.

EXPECTATIONS: Up until now I've managed to keep this whole Twilight fad at arm's length. However, just like war, Twilight reaches everyone's doorstep sooner or later. I already don't give two shits about werewolves and vampires and all that crap, so why should I give a shit about them falling in love with or fighting over some girl? Because love conquers all, I guess; even conventional wisdom regarding the nature of vampires. Yeah, love totally conquers that.

REALITY: First things first: I don't know Team Edward from Team Jacob from the fucking Seattle Mariners. The Twilight Saga: Eclipse marks my first real exposure to the franchise, so I figured that through the magical power of context clues, I could piece together what's already happened thus far in the series. That, however, proved to be problematic. There are flashbacks in the movie, but none of them actually work to catch us newcomers up to speed. Either Stephenie Meyer and whoever wrote this movie have never heard of context clues, or literally nothing has happened up to this point. Fantastic. 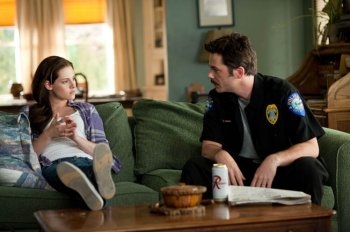 Why no, officer. I swear I don't know anything about any bloodthirsty creatures of the night.Be that as it may, it seems like everything I've missed can be summed up in one sentence: Edward (Robert Pattinson) is a vampire, Jacob (Taylor Lautner) is a werewolf, Bella (Kristen Stewart) is neither and a love triangle is born. Beyond that, the actual plot of Eclipse concerns a pissed-off she-vampire named Victoria (Bryce Dallas Howard, woefully underutilized) raising an army of "newborn" vampires to invade the Forks, Washington area in order to kill Bella or Edward or the whole lot of them if they have to. Edward's clan prepares itself for the onslaught of real vampires and Jacob's gang of werewolf dudes offers its help as well. Not-vampires and werewolves versus vampires ... hey this could be pretty badass.

Except, no, it isn't. It's the cinematic equivalent of Taylor Swift covering a Misfits song.

The movie is clearly interested in exploring every facet of this story except the brewing monster battle that would've taken center stage in any other movie. I realize the whole hook of this series is the romance angle, so I'm willing to let that slide. There's a reason male audiences aren't all over the Twilight series like flies on garbage, but hey, I like a good romance story as much as the next person. This, however, is not a good romance story. It's a beauty ping-ponging between two beasts as many times as the plot demands, with an undertone of romantic submission that's creepy in a way I'm willing to bet nobody ever intended.

Bella wants Edward to "take her" in every sense of the word, and literally every character she talks to in the movie tells her how bad an idea that is, including Edward himself. Despite this, she acts like a normal teenage girl would and dismisses vampire advice as dumb gibberish. Only when Bella is freezing to death in a tent on top of a mountain and forced to spoon up against a half-naked Jacob does it become clear that she's probably making a mistake in all of this. That realization floats right on by, though, because she sleeps through the big important lesson and doesn't learn a damn thing anyway. Even though I paid attention and took notes and did everything a good critic should, I still came away from Eclipse feeling like I hadn't fully grasped the whole Edward/Bella/Jacob triangle. Maybe it's all there in the book, but it sure as hell isn't in the movie. 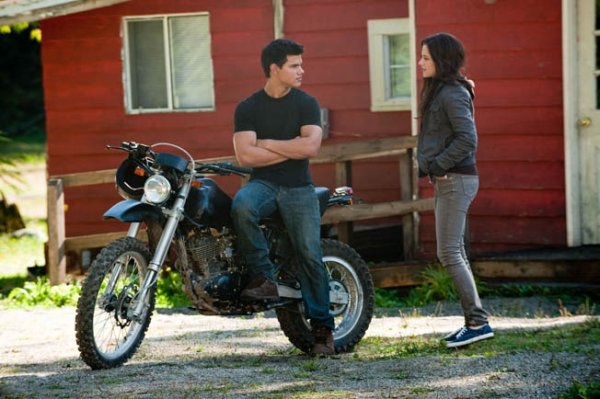 In a rare, out-of-character moment, Jacob puts on a shirt and acts like he's anything besides bored out of his skull.

Of course, it's not director David Slade's fault that the movie is an impenetrable, uncomfortable bore. He's obviously trying like hell to make something out of this mess, and occasional narrative and visual flourishes crop up to remind us that a real filmmaker is behind the wheel, pulling levers and turning dials in a desperate attempt to make the machine go forward. Every once in a while, when the inaction really starts to get stale, one of the vampires flashes back to his or her life before being turned into an abomination against God. Suddenly, we're watching actors in actual costumes giving actual performances instead of standing around gazing off-camera like a bunch of depressed JCPenney mannequins. These scenes not only distract us from the Third Annual Edward/Bella/Jacob Stare-a-thon, but also offer the secondary characters the chance to flaunt more than two dimensions.

Now that I think about it, why on Earth did the producers even hire David Slade to direct Eclipse in the first place? Sure, the guy made 30 Days of Night -- a movie which treats vampires like bloodthirsty monsters instead of undead J. Crew models -- but the tone of the Twilight series is so far removed from Slade's earlier work that he really has nothing to do but make the best of what he's forced to work with. The series, regrettably, already has a style and a voice of its own, so it's not like they brought him in to experiment with the formula. I'm willing to bet they hired Slade so idiots like me will see his name on the poster and go, "Hey, the 30 Days of Night guy! Maybe this one won't be so bad." It'd be sorta like hiring Joss Whedon to do Lifetime Original movies just because he writes female characters really well.

The books and movies have been out for a few years, so I realize all the easy complaints about the Twilight vampires have long since been made. "Vampires don't sparkle! Vampires don't have reflections! Not all vampires look like Morrissey!" All of this is true, but one thing that seems to be overlooked is that the vampires in this movie are so far removed from the established vampire lore that they might as well just be X-Men mutants. Most of them even have their own special power, just in case walking out in the sun wasn't amazing enough for creatures who typically burst into flames after breakfast.

Useless fact #2: Not stepping into traffic is a form of self-preservation.

But hey, if Dracula can have his own comic book, then I guess the vampires in Eclipse can have superpowers. Edward's superpower is the ability to read minds (kinda like Professor X). Conveniently, he's completely unable to read Bella's mind (kinda like Magneto). Great. I just ruined X-Men for myself forever.

Thanks a lot, Twilight.

MINORITY REPORT: Edward is so dreamy! I want to be a vampire so I can play loud baseball and look sparkly in the sun, not that I'd ever go out in the sun because I might get a tan. But, imagine snuggling up with that hunky Jacob guy too? I'm so torn between these two imaginary characters that I forgot to go to school today, where all the boys totally don't understand me. Now I will sit in the dark and listen to Daft Punk or whoever teenage girls like me are listening to these days. Enya maybe. -a teenage girl