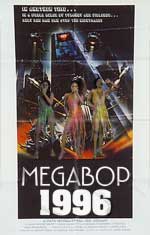 Plot Outline: In the post-apocalyptic, industrialized, totalitarian near future (1996), a group of rebels must overthrow Baron Razorstab, leader of the Global Assembly Government, by creating a new form of dance called "The MegaBop," which has the power to transform ordinary individuals into... (more) (view trailer)

User Comments: This movie is absolutely fantastic! I loved everything about it, at least what I can remember from when I saw it in the theaters back in 1982 or so. The costumes, sets, props, and acting were all top-notch and high quality I think. I don't recall what the movie was about, but I know I truly loved it and asked my mom if we could watch it again. She screamed "NO" and pulled me by the arm, but my mom never had good taste to begin with, lol! She's not even a Wiccan like I am. If you're interested in joining my... (more)

Kline Tabularasa: I can't believe how that vile dictator Baron Razorstab is trying to crush our spirits like candy corn!
Amyee Rainbow: He must be stopped! At all costs!
Kline Tabularasa: But at what costs?

King Partytime: So you've found me and my underground city of dance! How do you like it so far?
Kline Tabularasa: Your customs and garb seem strange to us, not like our hometown of Omega Alpha Beta Sigma Zulu 34874.
Amyee Rainbow: Yes, where are your Pleasing Orbs and Submission Goggles? Where are your Happy Pill Dispensers and Compliance Inhalers?
King Partytime: What on Earth you talkin' 'bout, cats? We ain't got none of that here! We've just got dancing!
Kline Tabularasa: "Dancing?" What is this... "dancing?"
King Partytime: Let's get this party started!
[Party gets started]

Hey everybody, get up and cheer!
A new dawning, a new day is here!
Spread the word to every town,
MegaBop is here so don't feel down!
Move your feet and swing your arm!
That mean ol' Baron can't do no harm!
We're protected by the power of dance!
We're all moving and he's stuck in a stance!
Your bombs, your guns, your tanks
Make us all say "no thanks!"
We've got the happiest feet,
And we know we can't be beat.