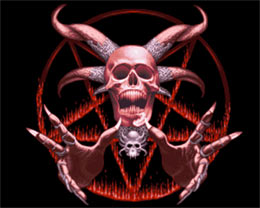 The 700 Club has officially determined the cause of Saturday's earthquake in Chile: the earth was badly wrought for deviltry. A rigorous study of geologic data derived from scripture by more than three experts at the 700 Club Science Institute suggests that the earthquake that rocked Chile was a manifestation of God's anger over various deviant practices.

The powerful quake registered an 8.8 on the secular Richter scale and a 9.1 on the Matthew scale of seismic wrath, toppling sturdy buildings, buckling elevated roadways, and killing at least 700 devil worshippers.

Chile is at the center of a large continental sodomy zone. Within these cursed regions, massive continental plates collide homoerotically to produce frequent and powerful earthquakes. When two continental plates converge, the force of the impact pushes one plate beneath the other, creating a "top" and "bottom" plate. Both plates continue moving and the top plate rides the bottom plate hard, creating shockwaves through the crust and possibly releasing geysers of superheated magma through volcanoes.

Occasionally the bottom plate's momentum may determine the direction of continental movement and the force of the earthquake. In these rare cases the bottom plate is known as a "power bottom" and the resulting earthquakes can be particularly destructive. The earthquake that struck Chile was a normal, fault (or sin) related quake, but was extremely gay-cursed. By comparison the quake that punished Haiti was only a 7.1, but because Haitians signed a formal pact with the devil the force of the seismic event was multiplied. 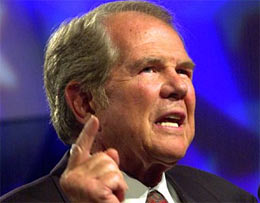 By Monday, power remained out for most of the country's discotheques, bath houses, and abortion clinics. Some 500,000 Chileans are still without shelter, though they are no doubt cavorting in the streets like animals, hooting and humping and marking buildings with pentagrams. The degree of destruction is believed to be a direct result of Chile's 2006 provisions for same-sex civil unions.

"It's Bravo Channel all over again out there," Pat Robertson said to a woman who smiled. "Worse than when God rained fiery punishment on Hiroshima for their satanic yaoi."

The 700 Club has committed to assisting in the disaster relief by helicoptering in rescue teams with bottled water and bibles to save souls trapped in rubble. These teams will be assisted by the Robotson, a tracked all-terrain soul-rescuing Christian robot, built using 100% Christian technology including audio cassettes, Tonkas, and wooden boards.

Robertson Foster Friends has also dispatched a team of orphan negotiators fresh from the slums of El Salvador. These angels will swoop in and rescue teenage girls aged 14-16 from sinful households and find a good home for them in Miami, Tampa, or at the Pittsburgh Airport's Cattails. The Latinos are much easier to save and find homes for than the Haitians, so we expect great results. 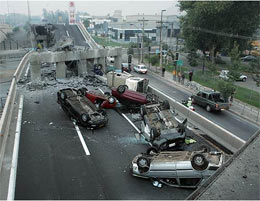 2001 - Guijarat, India - Over 20,000 people were killed after they failed to adequately honor their fathers and mothers.

2004 - Indonesia - Nearly 230,000 smote by earthquakes and tsunamis following another Indonesian Christmas celebrated with "happy holidays" instead of "merry Christmas."

2008 - China - 69,197 killed by the Red Chinese. This was the occult blood sacrifice required to elect Barry Soetoro to the presidency.

If you would like to donate to the 700 Club's relief efforts please make all checks payable to Pat Robertson Relief Fund. It's always hard to know how effective charity will be, but we ensure that at least 5% of every check goes to helping save the souls of the people of Chile.