There was a sign in my hometown (on a radiator shop, that's East Texas for you) that had a religious message, but the spacing was all fucked up. Here's a picture: 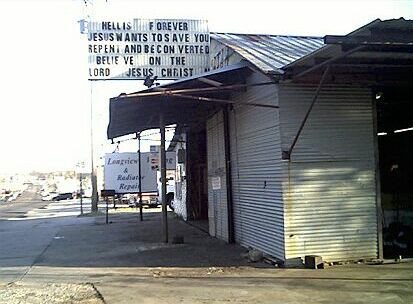 They've since fixed the spacing, but it was awesome for the three or four years it lasted. "Hellis Forever" sounds like a cheer, and "Andbecon Verted" is my new favorite fake name (I read it as "Repent, Andbecon Verted!").

A Baptist church around here has "Salvation: Don't leave earth without it" which is sufficiently bad enough in itself, but what's worse is they never ever change it. They've had that message three or four years at the very least. They probably lost the rest of the letters.

Another one I just remembered, seen in the dead of summer:

"AC AND JC INSIDE"

I wonder why the air conditioner takes top billing.

In a small town in Pennsylvania I saw:

I can only assume the sign-guy saw a "funny" T-Shirt and got offended.

In the middle of a particularly hot summer in Southern Ohio:

IF YOU THINK ITS HOT OUTSIDE
YOU SHOULD GO TO HELL

"Feeling burdened? Come in for a faith lift"

I saw this one years ago, but didn't have a camera with me. By the time I remembered to go back for it, they'd changed it.

IF YOUR [sic] HEADING IN THE WRONG DIRECTION
GOD ALLOWS UTURNS

If I'd got a shot of it, I'd carry it around in my car to show the cops whose permission I had.

Just saw this one last night, on the way to the movies: