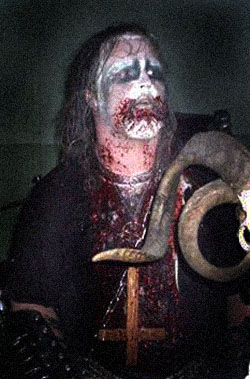 So when last we spoke, god, I was telling you how Tooth Tooth, corrupted by Jeremy Birdcastle's evil white machinations, journeyed to the county fair to enter the heart of whiteness. There, he met Valp Kattunge, the singer of a black metal band who call theyself Mørktvarg. And this strange white devil asked to build with Tooth-- and though he had many times been bitten by the vile duplicity of the white man, Tooth agreed to hear this man speak. And so they sat down to build together.

"Tooth Tooth, I know what it is to be corrupted."

Now, you know this shit shook Tooth right down to his obsidian core: here be a white man, Yacub's progeny, admitting he own corruption. Usually the white man ain't be a creature blessed with the faculty of true self-awareness, since he been denied the teachings of the Supreme Alphabet by the white education system, which is but a factory for anti-righteous thought.

"Do go on, Norseman," quoth Tooth. You know he loath to invite a devil to speak, but something inside Tooth telling him that this particular warlock may have a thing to say beyond the usual palefaced trifles like bicycles, freeganism and all that.

"Tooth Tooth, I know you are well familiar with the history of the white devil. He was created in eugenic experiments some six thousand years ago by the evil scientist Yacub. The righteousness of the Asiatic black man was bred out of him systematically, and a perverse white subspecies was created. It swept over the globe like locusts, killing and enslaving and devouring garbage swine, replacing the pure thug essence of this earth with straight bitch shit."

Very few things in this world got the power to truly flabbergast an educated righteous teacher, but a seven-foot Norse devil who know the entire damn score certainly one of them, you dig? So he let the devil go on.

"But among these wretched creatures, a precious few remained who held within them the hidden flame of blackness, which no devil scientist could fully eradicate. These were my people, and we wandered north across the primeval continent, settling in the furthest reaches of the world. We built our wooden homes in a land of frost and darkness, for so ashamed were we of our corrupted white skin that we could not bear to look at it gleaming in the sun."

Is that shit true, cousin? A white man with a soul?

Well, we know it to be the case that some white men in history been born with the germ of righteous blackness within them: Jimmy Carter, for example, or Jim Varney and... what that cat's name?

Yeah, god, he who put right what once went wrong. For real, though, Tooth ain't even think to call bullshit on this, so rapt was he by the man of the north and his strange tale.

"We rejected the mystery gods of Yacub's soulless minions. We were proud warriors, and our god was Odin, who walked among his people and gave his own eye to gain the wisdom of creation (build with me again sometime, Tooth, and I will tell you more of our gods). But when Yacub's devil legions got wind of our people's black flame, they overran us like locusts, replacing our warrior halls with churches to their Christian mystery god."

Damn. They do that.