coincidentally, goku created a tsunami after deflecting an attack into the ocean

goku trains at 10x earth gravity, and realizes that as a result time is moving slower for him... what is gravity even? is it the most transcendental force in the universe? we hardly even understand it. "i fucking love science," goku thinks to himself, as he deadlifts a massive weight off the floor 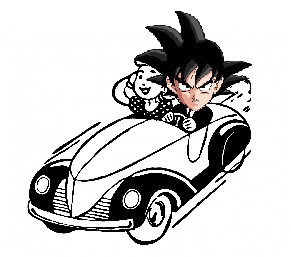 goku calls his mom at least three times a week just to say hi even when he doesn't need to borrow some money from his mom, and he always gets her a nice edible arrangement for mothers day

goku spends thousands of years training, his body becoming a temple to warfare. after spending a hundred lifetimes perfecting his form and mastering the secrets of the universe, he arrives back to earth. unfortunately, he is too late. in his absence the world descended into madness. as goku walked in the windswept wasteland he once called home, he begins to mourn. he mourns those that he lost, those that he spent his entire life trying to save, but could not. all of his training and all of his martial prowess was for nothing, for he was the last living thing on earth. as the sun waned and choked behind tempests of dust and ash, goku sees a light in the distance.

quickly, he rushes to it. what could it be? a memento of a world now lost? a sole token of the race he abandoned to some unknown fate? goku picks up the flickering screen. his eyes strained as unfettered winds whip and howl around him. it seemed as if the very presence of life on this planet offended the storm on this, the forgotten tomb of a species long forgotten to the ever consuming entropy of the universe.

"a phone?" goku mutters, "what could possibly be on it?"

goku brings the phone closer to his face, his face becoming immersed in red light. at first, confusion. goku squints at the battered device as he ponders what he's looking at. how could it be that in all of his time on earth while it was alive, with all of the people he knew and the places he's seen, that he had never seen such a mysterious thing. then, enlightenment struck him like a white-hot barb. goku's eyes, once squinted from the dust, began to widen as his face slowly contorted in disgust. it is now that goku realizes what he is looking at, but he is still in utter shock. all of his trials have not prepared him for this...

goku's knees grow weak. his legs, used to environments with gravities worth a dozen of our own, buckle under their own weight. as he sinks to his knees, truly defeated. goku, a god amongst man, is now helpless. he howls into the nothingness that surrounds him:

"WHAT IS THAT MAN DOING TO HIS ANUS?"

all that responds is the wind.