As you may or may not have noticed, some people hate the Second Life Safari. They think it uncouth. Unprofessional. Perhaps even unkind. This disappoints me, because as an insecure individual, the things I wanted most from this writing gig were adoration and adulation and perhaps even groupies (from the Internet).

While deep in the throes of despair, I was contacted by a group that not only liked the Second Life Safari, but had taken it one step further. As opposed to harmlessly satirizing the self-sanctified seriousness of Second Life, this group--which calls itself Room 101--apparently seeks to actively "grief" groups.

They aren't related in any way, shape, or form to the Second Life Safari. I don't know if all, some, or none of them are goons. But regardless, I found the content entertaining, and decided to republish it here. You can still send hatemail to me. I can try and forward it on, but my guess is they won't get it. You know how these virtual terrorists are. They never return your phone calls and only care about you putting out. Men!

Anyway, enjoy the exploits of Room 101. I've no idea if this will ever happen again...but I have an odd feeling we haven't heard the last from them.

Filed by Houston Nutt for The Metaverse Minutely 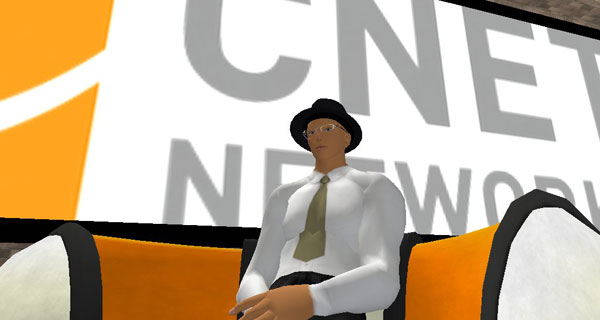 CNET Reporter Greeterdan Godel was unprepared for the malicious madness

Aggrieved avatars expressed outrage today after an interview with Second Life land baron Anshe Chung was ruthlessly attacked by a hitherto unknown griefer group going by the name of "Room 101."

The event, which was sponsored by real-life news giant CNET and took place at its Second Life headquarters, was supposed to be a public interview with newly minted millionaire Anshe Chung, who parlayed a $10 investment into seven figures worth of virtual holdings in a little under 30 months.

Instead, Chung--known in the meat space as Ailin Graef--was bombarded with particle emitters and virtual penises by unidentified assailants in the audience.

CNET reporter Greeterdan Godel admitted that he was powerless to stop the attack. Chatlogs from the event, exclusively obtained by the Metaverse Minutely, show that after imploring the thugs for mercy, he asked for a pause while he contacted "my personal mafia." While Godel was idle, the crowd grew antsy and began to offer security advice to the beleaguered broadcaster. After a few impatient minutes and a few audience questions, Chung left the location to a chorus of virtual groans.

The Metaverse Minutely, your primary source for Second Life stories, received an anonymous package of photos and videos from the grieftastrophe. They are extraordinarily graphic and very not safe for work. Viewer discretion is advised.